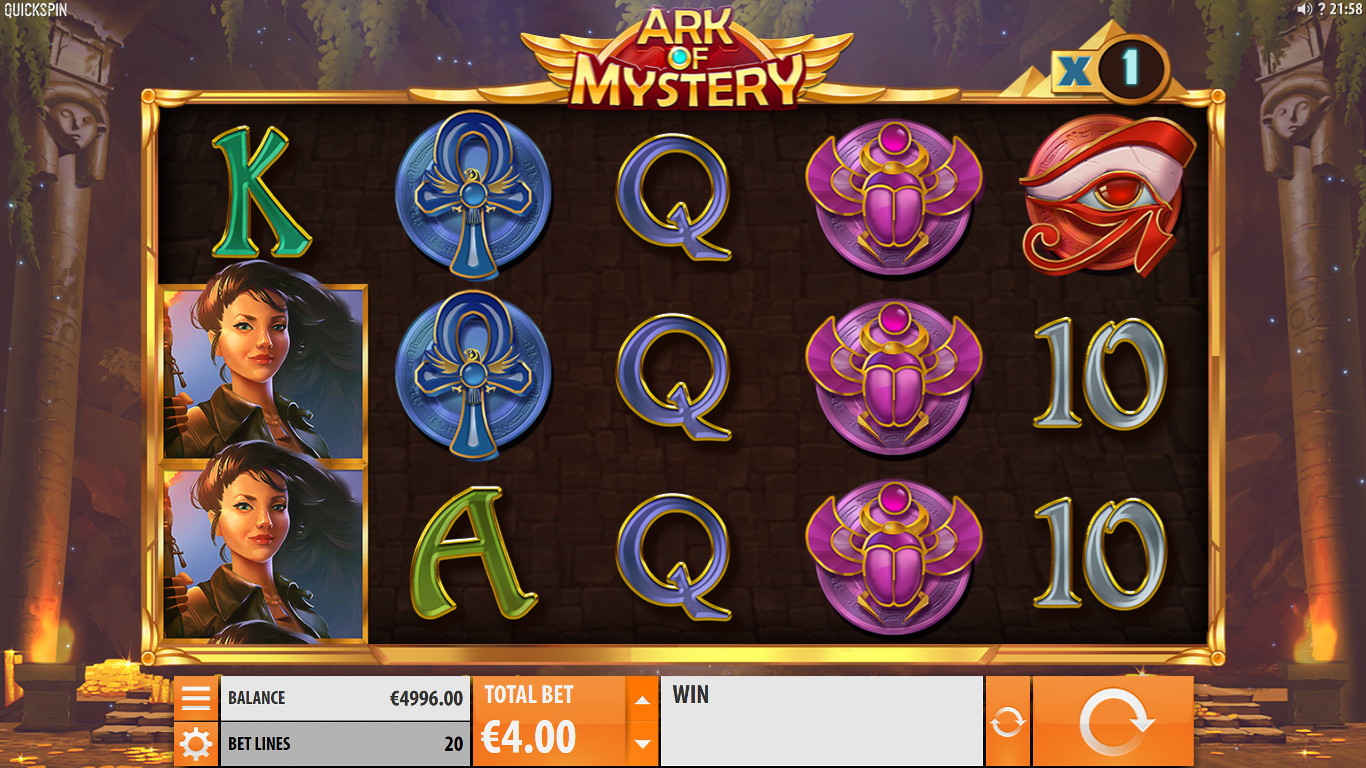 Quickspin has been releasing only the most artistic, beautifully designed slots since day one. The newest release, the Ark of Mystery shows that Quickspin takes the job seriously and its developers and designers invest a lot of love, time and effort into the games. This latest one is world-class, no doubt.

The Ark of Mystery features a female protagonist, Anna, who’s taking you on an exploring adventure in ancient Egypt. The game gives an enormous payout potential and its minimal bet is quite decent, making the game suitable to any type of slot player.

There are two simultaneously present special features in this slot game. The first one is the Wild Respin Feature. The Wild in the game is a Golden Ark. When the Golden Ark lands on reels 4, 3, or 2, it triggers the Wild Respin Feature. Now, the wild gets locked in place and you are rewarded with a respin. You can actually get between 2 and 6 respins. Additionally, the same wild can expand on the entire reel, one symbol at a time with each spin. This feature doesn’t end until there is no space or no more wilds left on the reel.

Another cool feature that can significantly boost your winnings is the full stack of wilds that can land on one of the three middle reels. This stack of wilds in combination with the pyramid-shaped Multiplier Booster can bring you some staggering winnings.

Anna, herself, can bring you some whopping payouts as well. In fact, landing 5 of a kind can bring you a payout 50x your stake. There are other high-paying symbols, also, that pay less than the Anna symbol.

The Ancient Egypt theme has been featured in many slots, so you probably have an idea of which symbols this slot may include. You will find the Eye of Horus, Ankh’s, and scarabs, with some sort of an ancient temple in the backdrop. You will find gold on the left side of the background and a treasure chest as a symbol on the reels. Although the theme is quite common, the state-of-the-art graphics make it really special. The talent of the great artists working for Quickspin stands out from the crowd. The female explorer is pictured mesmerizingly, with emerald eyes and an eternal beauty.

The bet per line can be from $0.01 to $5, which with the 20 paylines involved means the maximum bet options are between $0.20 and $100.00. As you may have gathered so far, the greatest potential can be obtained during the respins and with the help of expanding wilds and multipliers. In fact, you can get 22x multipliers in total, and a regular win of up to $100,000. Do the math and see the massive payout potential. With a RTP of 96.53%, it is definitely worth a try.

Regardless of whether you enjoy Egypt-themed slots, you will definitely enjoy the Ark of Mystery. The theme is presented in an exquisite way, the payouts are impressive and the special features make the entire gameplay pleasantly action-packed and engaging. It definitely surpasses average Egypt-themed slots and is more than recommendable.