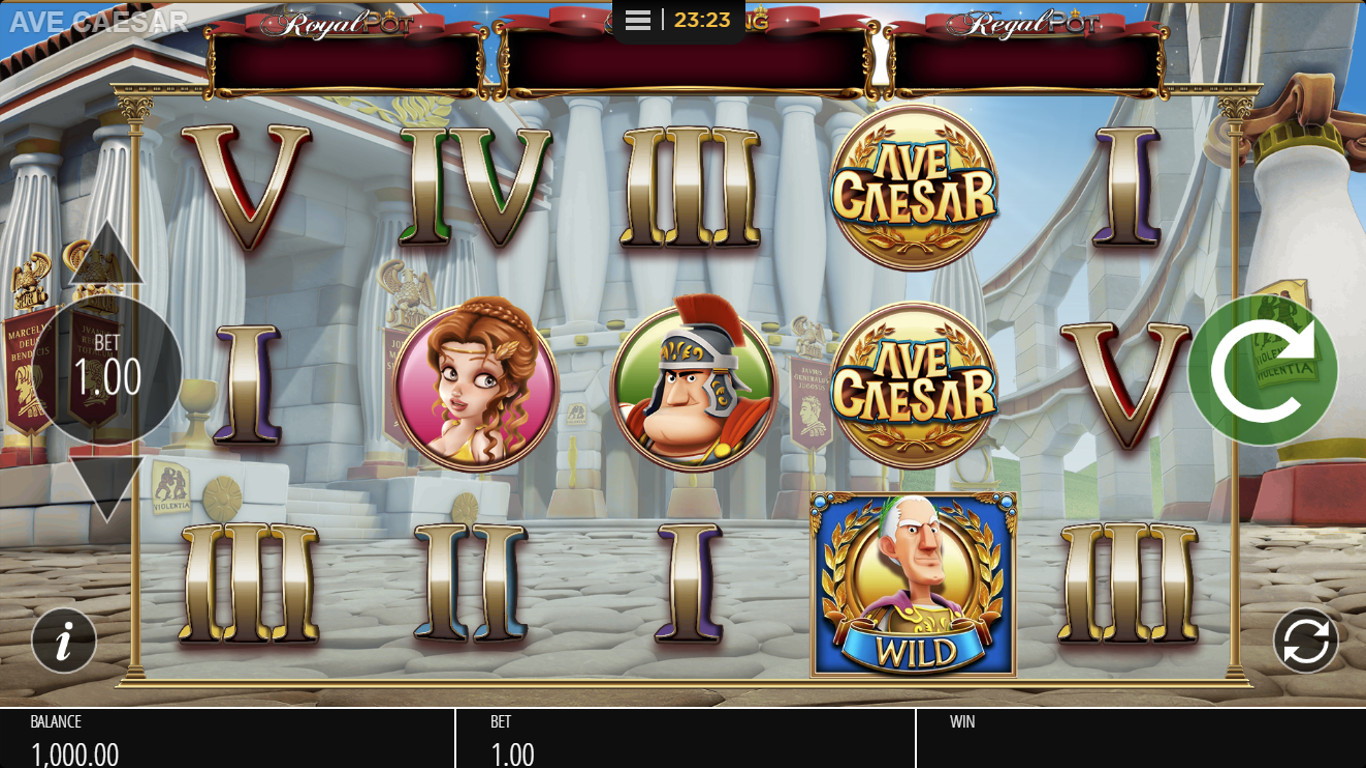 The Ancient Roman-themed slots have always been a hit among software providers as well as among slot players. Ave Caesar Jackpot King is the newest addition to Blueprint’s slots selection that will mesmerize you with its graphics and will take your breath away with the promising payouts. Start the journey to Rome, in the year 65 BC and be prepared to meet the popular Roman emperor that is portrayed here as the Jackpot King.

The brave Caesar is the Wild in the slot, which substitutes for any other symbol except for the Bonus symbols. The Wild will be present often during the fabulous features, so let's start analyzing them.

The first feature you will come across is the Hannibal's Heroes. This feature can be initiated on any spin and will include Hannibal calling his army of elephants with his horn. When the elephants pass across the reels, the reels will start shaking and stacked Wilds will start falling from the last position of each of the columns. That means that as the elephants leave the scene, there will be one or even more columns filled with stacked wild symbols.

The second feature is The Gaul. An Asterix-looking Gaul can appear on any spin, calling his village to try and knock him down with huge stones. As they throw the stones at him and miss, the stones will go right to the reels and leave mystery symbols behind them. These mystery symbols can become the same symbol with any symbol from the paytable or a multiplier.

The third feature is the Ave Caesar, where the emperor will demand a win from you. He will offer you a choice of over 6 mystery options. You get to choose one parchment with the following choices written on it: Big Win, Caesar’s Conquests, Roman Empire, 5 of a Kind, Druid Free Spins or Glory of Rome Free Spins. As you pick your favorite, Caesar will grant you the corresponding prize. But you can trigger these bonuses by landing 3 bonus symbols on reels 5, 3 and 1. The one on the 5th reel will reveal which bonus game you’ve triggered. Nevertheless, each of these bonus features can give you up to 10 Free Spins and Re-Spins, multipliers, sticky wilds, and cash prizes.

In addition, you have the special Centurion Maximus feature, where Centurion will appear and call his troops, which will appear with their spears between each reel. As some of them hit the top of the reels, pennants will fall covering either 3x3 or 2x2 spaces. The pennants will reveal the Maximus Mystery symbol, granting precious rewards.

Finally, you have the chance to hit one of the three Jackpot King progressive jackpots by landing 5 Jackpot King Symbols on 1 through 5 reels, where the biggest one is over $400,000 at present.

You will find Roman numerals as symbols, Centurion, a Roman Lady, and a Roman Soldier, and you will hear horns and drums in the background, mixed with the sound of galloping horses, fighting legions and racing chariots. With no further ado, when you combine the Roman-style visual and sound effects along with the aforementioned features, we can conclude that Blueprint executed the slot’s theme and graphics to perfection.

With a minimum bet of $0.20 and a maximum bet of $500.00, as well as with the 20 paylines, Ave Caesar Jackpot King offers a great winning potential and a bet convenient for any slot player. There are a lot of possible bonus features guaranteeing great wins and a huge progressive jackpot, which is more than one can ask.

If you wanted to see an example of a perfect slot, try Ave Caesar Jackpot King slot. You already know about the high-end, sharp and spotless graphics Blueprint provides players with, but these features in this game are simply unrivaled. Nothing can top them at the moment. We cannot find the words to give this slot the praise it deserves. Simply put: this slot is a must.