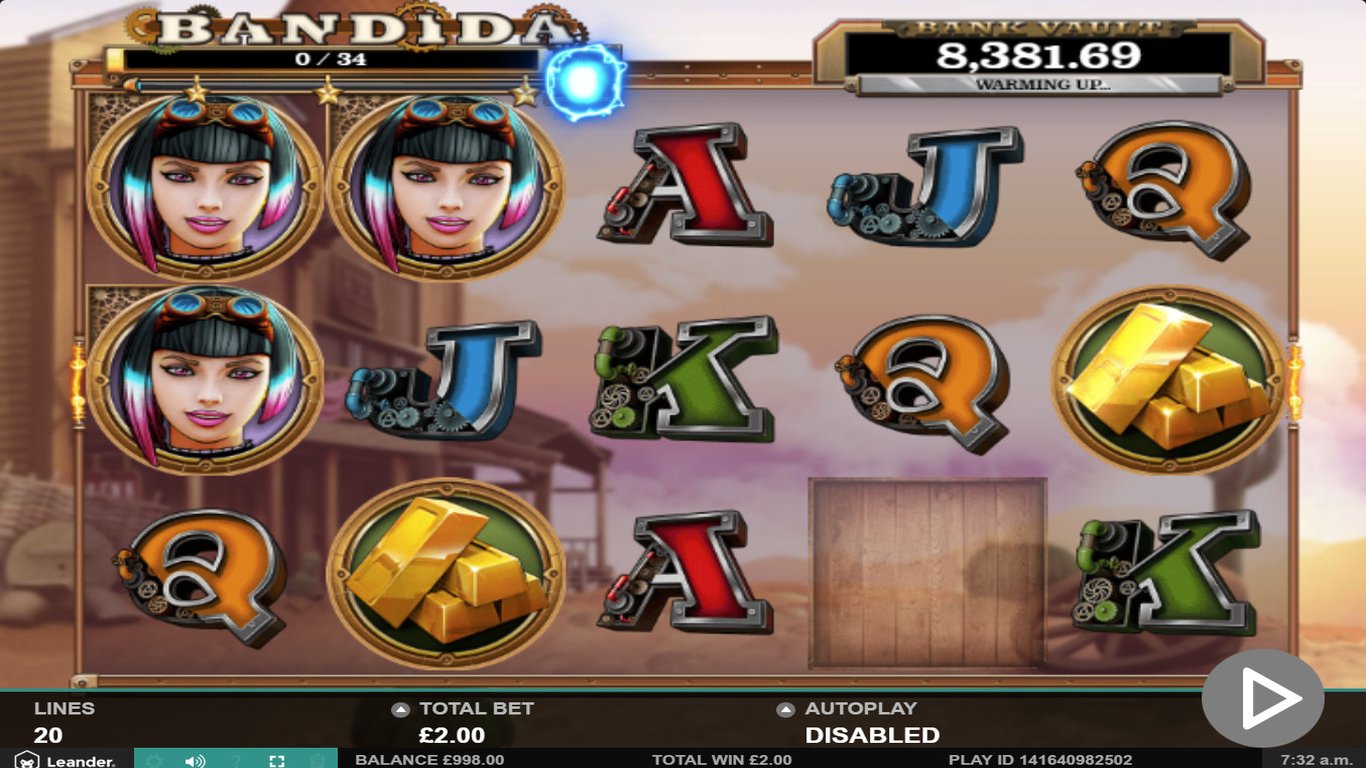 Leander Games has a new slot release, one based on a female bandit operating in the Wild West. It is a slot with a pretty interesting theme, which features cool characters with their awesome weapons. The gameplay is action-packed, and the slot has state-of-the-graphics. The name of the slot is Bandida.

The Wild symbol in the slot is a steampunk-style revolver, one of the most awesome weapons you will find in this slot. The Wild will help you in the formation of winning combos, but not as a substitute. You will actually have to land it in the proper spot so it can create a win with some other symbols in the winning combos. For a 5-of-a-kind made with Wild symbols, you will get a 500x payout.

Another feature you will look forward to is the Staked Symbols. One type of Stacked Symbols will be with the symbols that represent the main character, Bandida, which will bring you a 400x win. The other one is with the Sheriff symbol, which will pay you 300x. Both of these symbols can actually fill up the entire screen and give you some mega wins.

In case you manage to fill the first reel with the Bandida Symbols, you will trigger the Bandida’s Way feature. The feature will transform all top symbols into the Bandida symbol for that round.

If you fill the fifth reel with Sheriff symbols while the Bandida’s Way feature is active, you will trigger the Jailbreak Free Spins feature. This feature will give you 10 Free Spins.

Since this is a Wild West-themed slot, you should expect symbols such as a revolver, the sheriff, the Bandida, red rubies, gold bars and gold coins. In the background, you will see the saloon and a cactus, as well as a vast deserted space. The reels are transparent, so you can see all that clearly.

Other than the main characters as the highest-paying symbols, you will also find playing card symbols which are adapted to the theme. As mentioned, the game features some impressive graphics, so you will really enjoy how it looks visually.

The Wild, as we said, will pay the highest win for individual symbol win. This means that from the Wilds alone, you will get a payout as big as $20,000.00 for the max bet. However, the game features a progressive jackpot, which appears to be triggered as soon as it reaches a certain amount, so the chances to get it are pretty high. The game gives you the standard RTP of 96.01%, which is pretty awesome.

Overall, Bandida is a great slot. It offers all you need from a slot: great graphics, a progressive jackpot, a nice RTP and some pretty awesome payouts. The symbols fit the theme and the gameplay is smooth. The special features are engaging, so we would definitely recommend it.