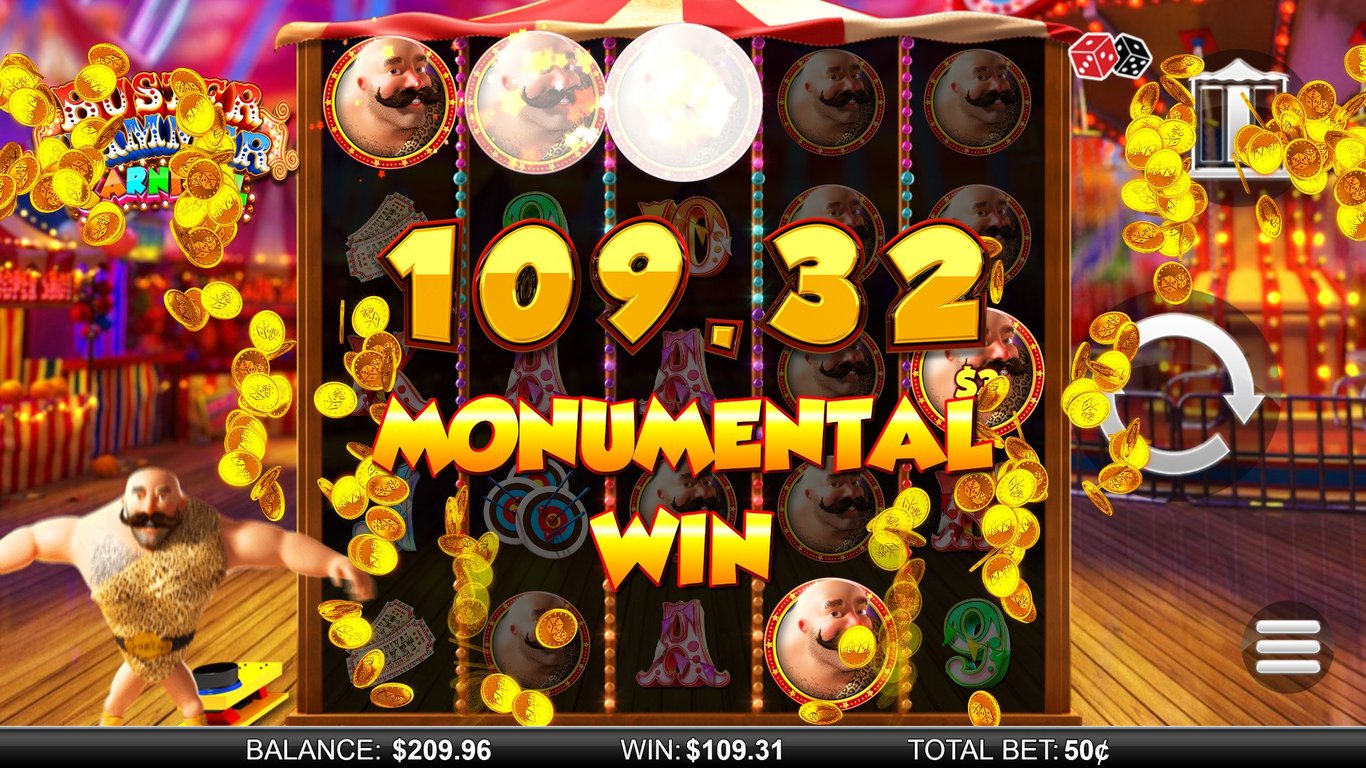 Buster Hammer was initially developed by Chance Interactive, but together with NextGen, the two developers created the sequel Buster Hammer Carnival. As the title implies, it is a carnival-themed slot, which features really fun characters and gameplay. There are several thrilling features involved, as well, which will definitely make your gaming experience really entertaining.

The first thing you will notice about Buster Hammer Carnival is that it features 5x5 reels, providing you with 3,125 ways to win. However, you will, later on, see that this can change and the odds of winning will increase, thanks to the special features involved.

The Wild in the slot is the Hammer symbol. It will substitute the regular symbols that land on the middle reels, depending on the level of your bet.

Provided you land at least one Hammer that takes part in a winning combo, you will activate the Wild Striker feature. During this feature, on each real it appears, Buster will be using his hammer. He will transform up to 5 regular symbols of the gaming area, as well as all Wild Hammers, into Gold Wild Hammers.

However, you can get the most out of the game during the Mighty Free Spins. You will need to land at least 3 game’s logo symbols, which are by the way the Scatters in the game, and you will trigger 10 Free Spins, in addition to a reward of up to 50x the stake. Now, during the Mighty Free Spins the reels become bigger, the game area increases to 5x8, and therefore, you get 32,768 ways to win. Needless to say, this is where you will get the maximum payout potential in the game.

Since the game is carnival-themed, you should expect to see a lot of related symbols. On the reels, you will encounter Buster, a chubby, bald guy with huge moustache holding his big hammer. You will also see tickets, hot dogs, and targets, all related to the theme, as well as carnival-inspired playing card Royals. The game’s logo is present as well.

In the background, you will see the carnival, portrayed with vivid colours and lights. As you enter the Mighty Free Spins, you will see clearer than ever that there is a red and white striped carnival tent on top of the reels. It goes without saying that the theme is depicted perfectly, and the two developers have done a really great job with the design.

Even though the RTP is not yet disclosed, you can rest assured that Buster Hammer Carnival has a lot to offer. Starting with the fact that a single winning combo can give you 12x the stake, or $300.00, then continuing to the 50x the stake prize from Mighty Free Spins or $1,250.00, and wrapping it up with the 32,768 ways to win, the game gives you so many chances to increase your winnings.

Buster Hammer Carnival is definitely a game that has a huge potential of becoming a hit title among slots players. There’s clearly a lot going on on the reels, the theme is amusing and the features are really engaging. With no further ado, it is absolutely a game you should try as soon as you can because some impressive payouts are waiting for you.