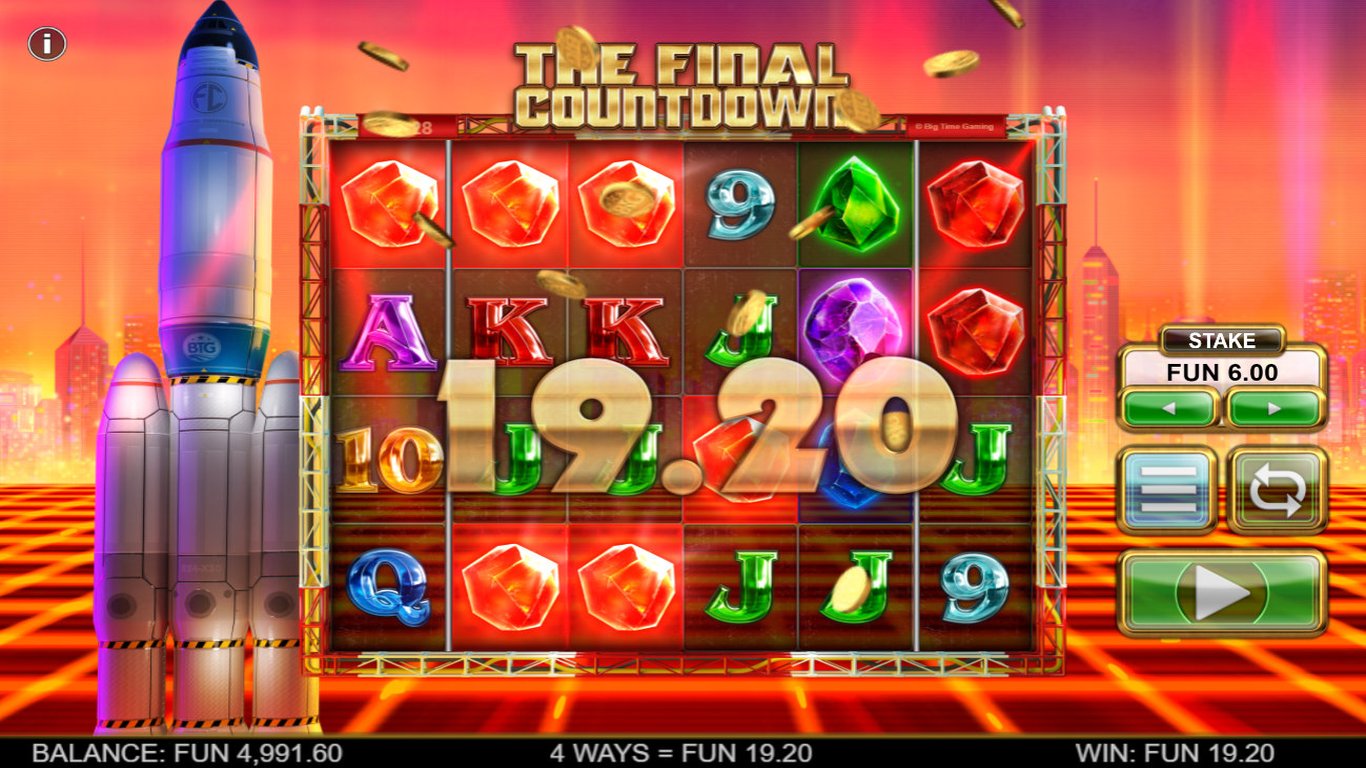 Big Time Gaming has released a sequel to Danger High Voltage, its masterpiece slot developed several years ago. Danger High Voltage 2: The Final Countdown is not at all similar to its prequel, except for the 6-reel and 4,096 ways to win reels set. This is a slot that is packed with themed special features, it features a space theme and it offers some stellar payouts.

The Female Crew Member is the Wild in the slot. The blonde crew member does not play its usual role of replacing for other symbols, but it clones herself to expand vertically and horizontally on the reels. These Clone Wilds depend on the number of reels that get cloned with the Reel Clone feature. During every base spin, there is a possibility that the Reel Clone feature will produce between 2 and 4 identical reels, between reels 2 and 5, which can also clone Scatters. The Clone Wilds, depending on the reels cloned can become 4x, 27x and up to 256x Multiplier Wilds with 2, 3, or 4 reels cloned, respectively.

The Scatter is the golden symbol displaying the letters FC (Final Countdown). If you land 3 or more of them, you get one of the two features from the Feature Selection. You can either choose the Heading for Venus feature or The Countdown feature. Should you select the Heading for Venus, you get 18 Free Spins, a Reel Clone active on every spin, and the possibility to retrigger the feature with 3 or more Scatters. In addition, you get a Velocity Wild that grows from 4x to 888x at random on a Reel Clone.

On the other hand, should you choose The Final Countdown, you get 18 Free Spins, during which the Countdown Scatter gives you the same payouts as the regular Scatter and reduces the Countdown, which starts at 10, by up to 3. When it reaches 0, the feature retriggers. On reels 2 to 5, you get a 4x Roaring Wild as the feature starts. These Roaring Wild can grow with each retrigger and increase up to 256x.

You see that everyone’s ready for the Final Countdown. There are flashing lights all over the place, waiting for the space shuttle to take off. The retro-futuristic feel is enhanced by the neon-lit backdrop and the city in the distance.

On the reels, you will see playing card symbols made of gems, for the lowest-paying ones, and a purple, green, red and blue gem as the highest-paying ones. The special features present the crew members, the blonde girl and the male astronaut. Visually, the slot looks stunning, spotless, presented with high-end graphics.

Danger High Voltage 2: The Final Countdown is a fair sequel to the original. It is designed superbly, it offers highly immersive gameplay, filled with Wilds and cloning reels and symbols, which can eventually take you to an incredible payout. Big Time Gaming has once again managed to surprise us pleasantly and reward us with an incredible game. The first chance you get, try it immediately, you'll definitely love it.