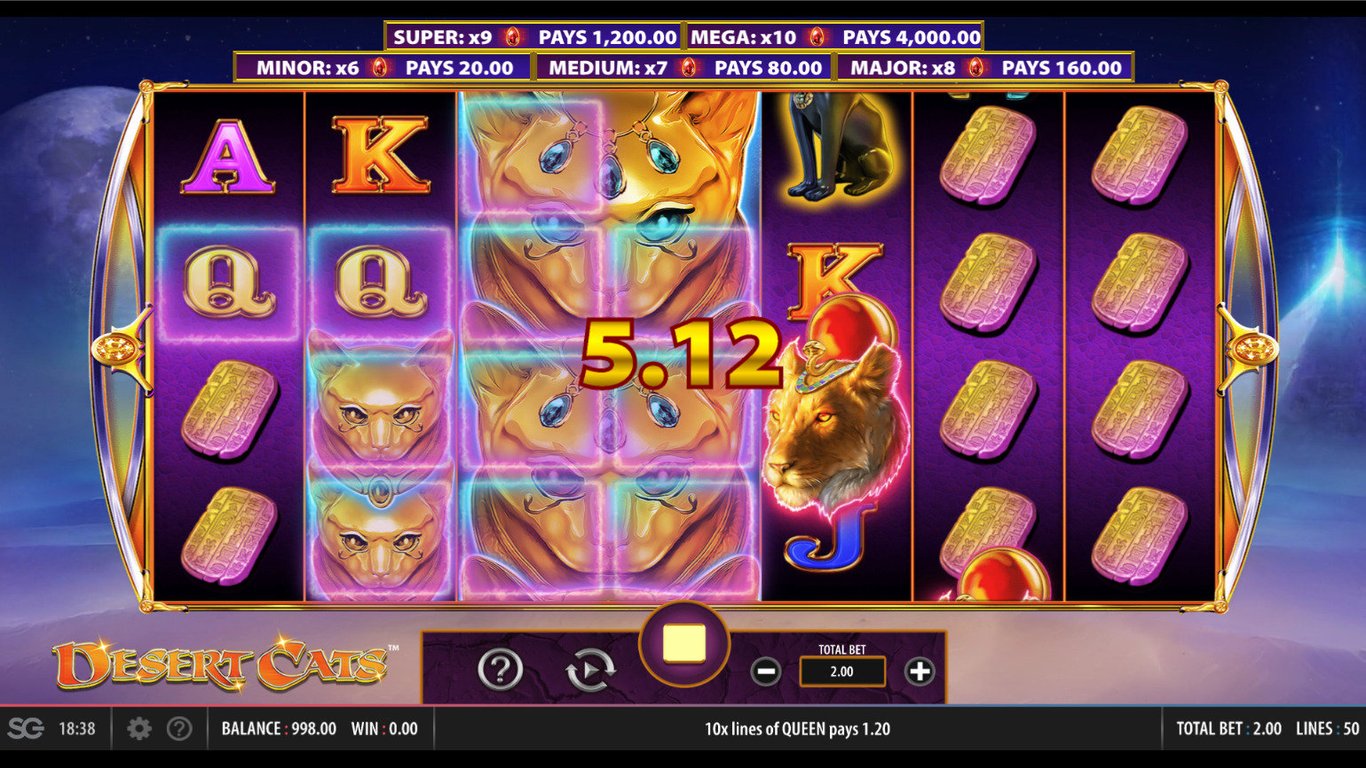 WMS has a new Ancient Egypt-themed slot release called Desert Cats. It is inspired by the cat goddess named Bastet. The cat goddess will appear in many forms throughout the gameplay, and will even transform into a gorgeous woman when it comes to life. When that happens, you will receive the highest of payouts.

Even though the features in Desert Cats are mostly the regular ones, you will see that some of them are modified and improved. For instance, the Cat Wild will not land on the reels in its regular size, but will sometimes occupy 4 positions with its 2x2 form. The Wild will, however, play its usual role of a replacement for the regular symbols. It won’t replace Scatters, obviously.

If you see that the 2x2 symbols have gems, you can collect those gems. There are special Wild symbols which have gems on them, which can only appear during the base game. In fact, these special Wilds will turn two adjacent reels into Wild Reels, filled with 2x2 Wilds with gems. If you manage to collect six to ten Red Gems with the aid of these Wilds, you can get the highest wins in the slot, from 10x to 2,000x the stake.

The Lion Scatter symbols will take you to the Free Spins mode. You will need to land three to five Scattered Lions to get 5 to 50 Free Spins. During the Free Spins, 4 out of 7 reels will turn into Wild Reels, grouped in pairs.

Bastet, Ancient Egypt's cat goddess is the Desert Cats' inspiration. As mentioned, this symbol will often appear on the reels, in many forms. You will see a black cat, a gold cat covered in gems and the Cat Goddess in a human form. There will be two other Ancient Egypt-related symbols and the playing card Royals as the lowest paying symbols.

Payout-wise, you can get 2,000x the stake from the base game, but there are also 5 fixed jackpots that you could hit. The Mega Jackpot will give you the highest payout, 10x the stake. The Super gives you 9x, the Major 8x, the Medium 7x and the Minor 6x the stake payout. These jackpots are not as great as the payouts from the base game but will make a nice addition to the $200,000.00 you could get from the gem collection. The RTP is not that great, a little below average, 95.79%.

Desert Cats is a nice game by WMS, with great graphics and beautifully designed symbols. Its gameplay is quite interesting and the features can provide you with an engaging gaming time. In addition, it can provide you with some significant payouts, since you can both hit a jackpot and receive the highest 2,000x the stake payout. In all, it is a game that deserves your attention, so you should give it a try.