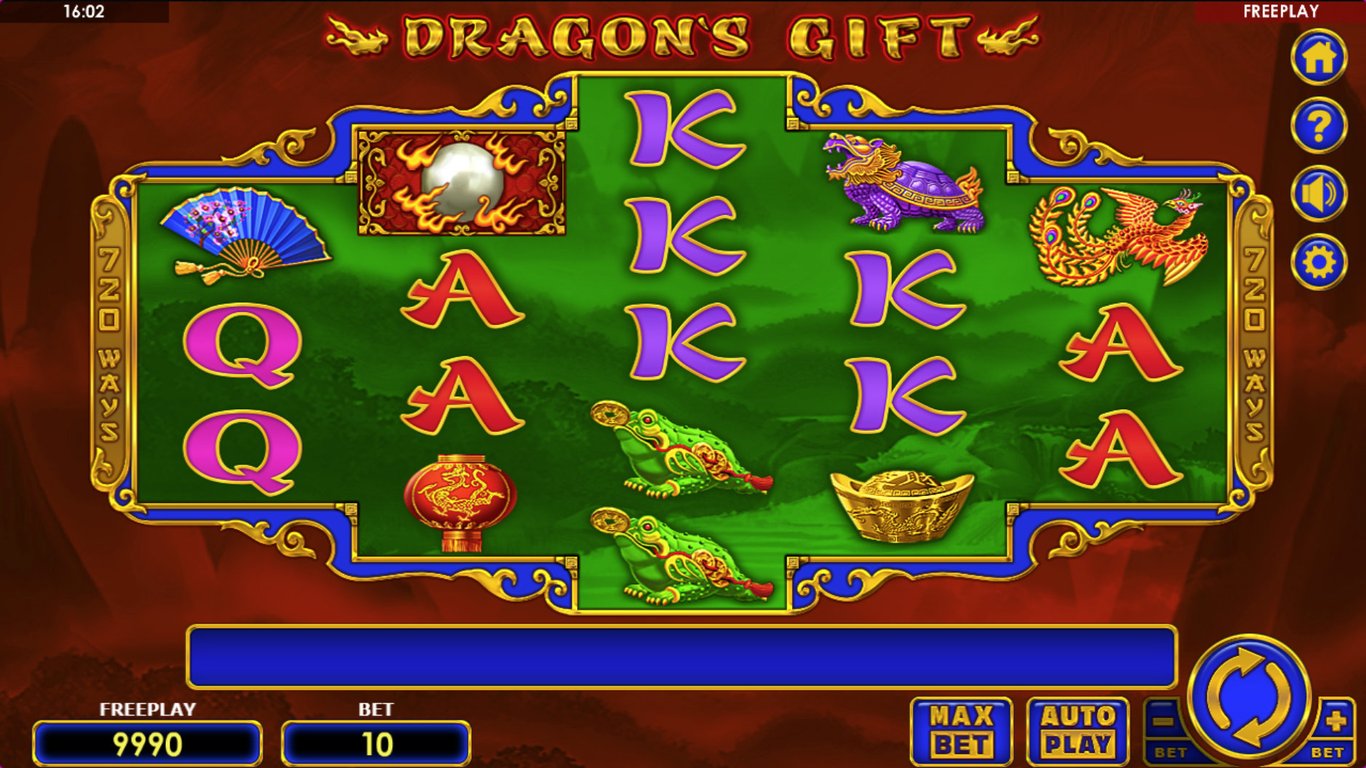 Dragon’s Gift is the newest slot release by Amatic, which features a relatively common theme, but one which will present to you interesting gameplay. The slot offers several features that can take you to the highest payout, and an unusual layout that spices things up even more.

The first feature that you will come across is the Dragon Wild symbol. You can have it appear during the base game and the bonus game, acting as a replacement for other regular symbols in the formation of winning combos. Forming new combos will be fairly easy, thanks to the Wild, because no matter in what position it lands, it can still act as a substitute, providing you with multiple payouts.

You will also see the Scattered Pearl symbol, which will take you directly to the bonus game if you land it enough times. If 3 or more Scattered Pearls appear, they will trigger 5 Free Spins. In addition, they will give you a cash prize of up to 50x the stake, depending on the number of Scatters that landed to trigger the Free Spins.

During the Free Spins, you will see Wilds landing on the second, third and fourth reel. Considering you have 5 Free Spins, you should expect a lot of winning combos at this point, since the middle reels can be covered with Wilds.

We mentioned the unusual layout. The game actually features 3-4-5-4-3 symbols, which means you will get 720 ways to win. This layout presents a great opportunity for you to form multiple winning combos simultaneously.

You will notice that Amatic intended for this game to look simple. That’s why it features average-quality graphics and a very common, Chinese theme. The theme, however, is depicted just right, since you can see gold ingots, paper lanterns, hand fans, fish, dragons, pearls, phoenix birds, frogs and turtles on the reels. These represent the elements present in most of the Ancient China legendary stories.

When it comes to betting, you will not be able to bet on the number of lines or ways to win, you will only need to select a bet from 10 to 1,000 coins, as your maximum and minimum bet.

Payout-wise, the Phoenix Bird will give you the highest payout for regular winning combos, of up to 25x the stake. Considering there are 720 ways to win, there is 18,000x the stake maximum potential in this slot. This is a significant payout if you take into account the highest bet of 1,000 coins.

Even though Dragon’s Gift has average graphics and a frequently used theme, they are presented fittingly. We can say that Amatic has developed a rather decent game. It offers several special features which can lead your way to the huge maximum potential of 18,000x the stake. Even though the RTP is not yet disclosed, the game offers several good things that can motivate you to try it.