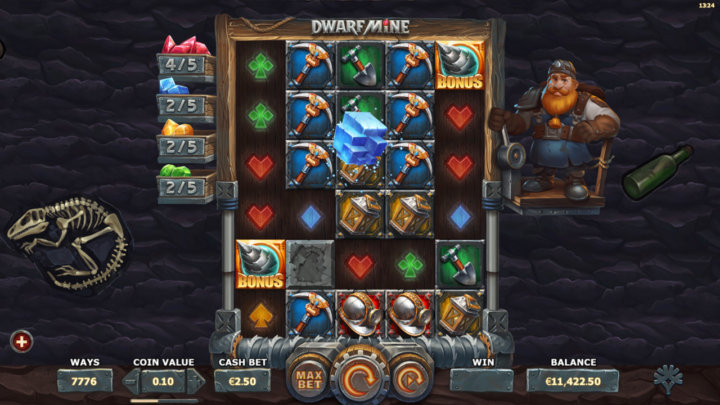 Yggdrasil has a new slot machine, called Dwarf Mine. The dwarf theme is far from a unique one; in fact, it is featured in many slots. However, we know that Yggdrasil always surprises us pleasantly with its design skills, so you should still expect the slot to be amazing. It gives you many ways to win and some major payouts to collect thanks to its special features.

The first thing you should be informed about is that the game features Expanding Reels mechanics, so initially you start with 1,024 ways to win but as soon as the reels expand, you can get up to 16,807 ways to win.

You can activate the Expanding Reels by landing Bonus symbols in the base game. You will need to land these symbols on the first, third and fifth reel. The column you landed them on expands by one position, and up to 3 additional positions on each and every one of the columns, giving you up to 16,807 ways to win.

The Bonus symbols will also help you trigger the Free Spins, as usual. You will need them on the same reels as before, and you will get 10 Free Spins with the reels expanded, containing 7 symbols each.

But there is an additional bonus game involved here. As the reels expand, they can unravel collectable symbols, the red, blue, yellow and green crystals. As you collect 5-of-a-kind of these symbols, you trigger the 5 Collection Free Spins.

During the Free Spins, you benefit from the major high-value symbols which are represented on the reels by the four collectable crystals. Landing 5 matching red crystals, you will get a 4x the stake payout.

Yggdrasil presented Dwarf Mine with cartoonish graphics, and we must say it was the right decision to make. As you load the game, you will notice the mine in the background, with bones, skeletons and hats of people who were buried in the ground.

On the reels, which represent a digging machine managed by a ginger-bearded dwarf, you will see symbols that represent the mining dwarves' tools such as helmets, lanterns, pick-axes and shovels. There will also be playing card suits present here, in red, green, yellow and blue colours.

As you could notice from the features, Yggdrasil has decided not to follow a pattern with Dwarf Mine and has excluded the Wild symbol in this slot. There is a Bonus symbol, however, which plays the major role here. It is the symbol displaying a Drill and Bonus written at the bottom.

As usual, Yggdrasil has excelled in designing this slot, but we already expected this. We were surprised to see no Wild symbol involved, however, we eventually saw that the Bonus symbol covers for it. The maximum payout potential is quite satisfying for both high-rollers and low-rollers, so we can just warmly recommend Dwarf Mine to anyone. Go for it and try it!