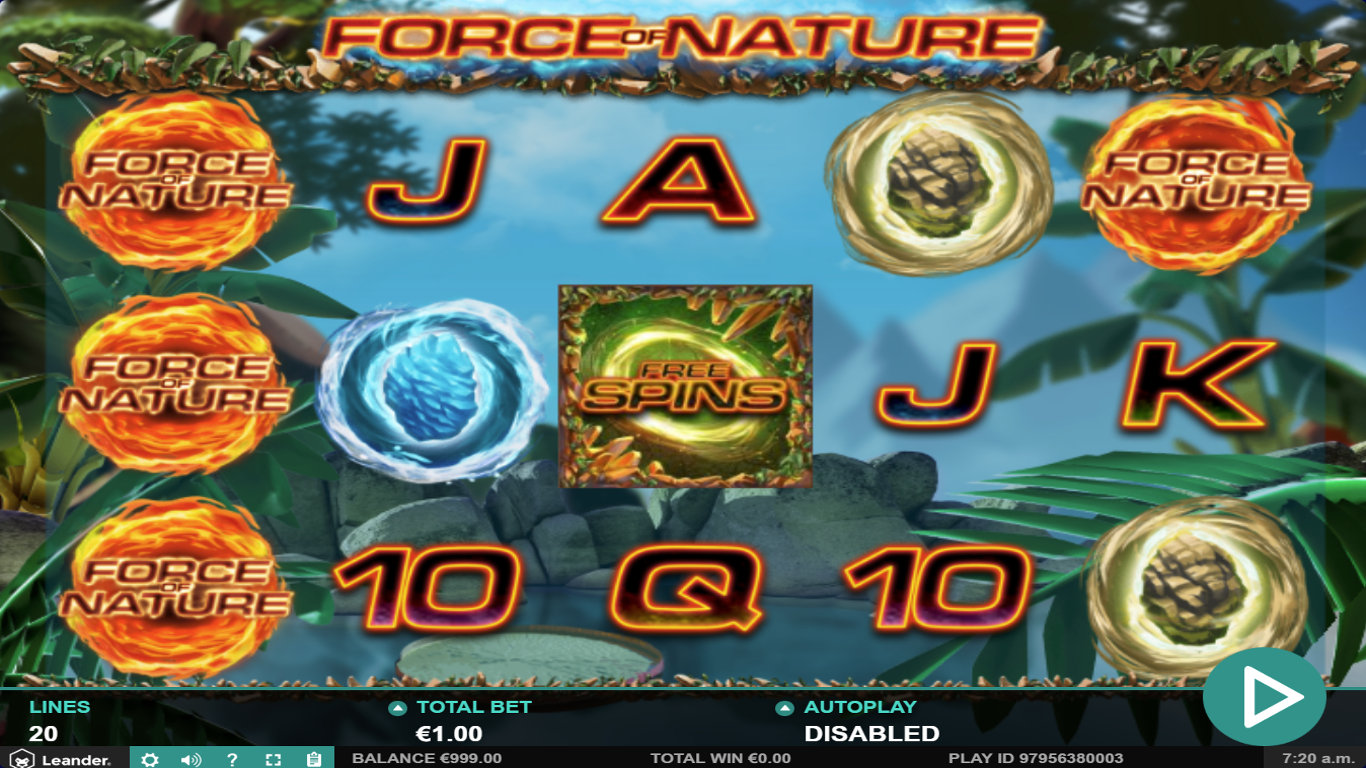 Leander Games presents its newest slot, called Force of Nature, and reminds you how beautiful nature is, but also so powerful and sometimes even dangerous. The game presents the storms, the earthquakes and the floods that take so many lives annually, in so many parts of the world. The story is also a strong reminder of what happens if we don't take care of our Mother Earth, and what the consequences can be.

There are four major natural disasters that can impact people’s lives and leave fatalities behind, the Tornado, the Earthquake, the Flood, and the Electric Storm. This is why Leander Games has decided to forget about most of the standard special features and incorporate the four major natural disasters as their special features. There’s one common feature, though, the Free Spins feature, the one standard feature that basically makes slots profitable.

Some may find it as a downside, some may find it thrilling and exciting, but these special features will appear randomly, except for the Free Spins, and you won’t get any special triggers for them.

The Tornado feature can appear during any regular spin. They come as a result of a weather deterioration. The Tornado can remove some symbols from the reels and allow for others to come and substitute them. The other symbols that will come on the reels will be of the same type, either Wilds or regular symbols, allowing you to form winning combos that will increase your winnings.

The Earthquake will, expectedly, shake the ground transforming two columns at random into Wild Reels.

When the Flood feature is activated, the water will rise and eventually cover all the reels. By doing so, the Flood will leave Wild symbols all over the reels.

Now the Free Spins come in the form of Electric Storm Free Spins, and this is the only feature you can actually trigger on your own. You will need to land 3 Scatters, one on the first, one on the third and one on the fifth reel. You will get 10 Free Spins and all the Wilds present on the reels will become Sticky for a maximum of 3 spins.

During Free spins, the first four reels can receive the Sticky Wilds, while the 5th reel can give you a special symbol, which can also appear Stacked, and add plus 1 Free Spin in the total of Free Spins.

The maximum payout per spin is set to be 1,000x the stake, and this payout is not that difficult to obtain since there are so many Wilds that can help you out. The $100,000.00 per spin payout is amazing if you consider the average RTP of 95.88%.

Force of Nature is a slot with a beautifully thought-out theme, presented perfectly. The only thing we didn't particularly like is the inclusion of Royals on the reels, but that's a minor grouch. Other than that, we find the slot to be good enough for us to recommend it to players who enjoy slot games with unique special features and a decent payout potential.