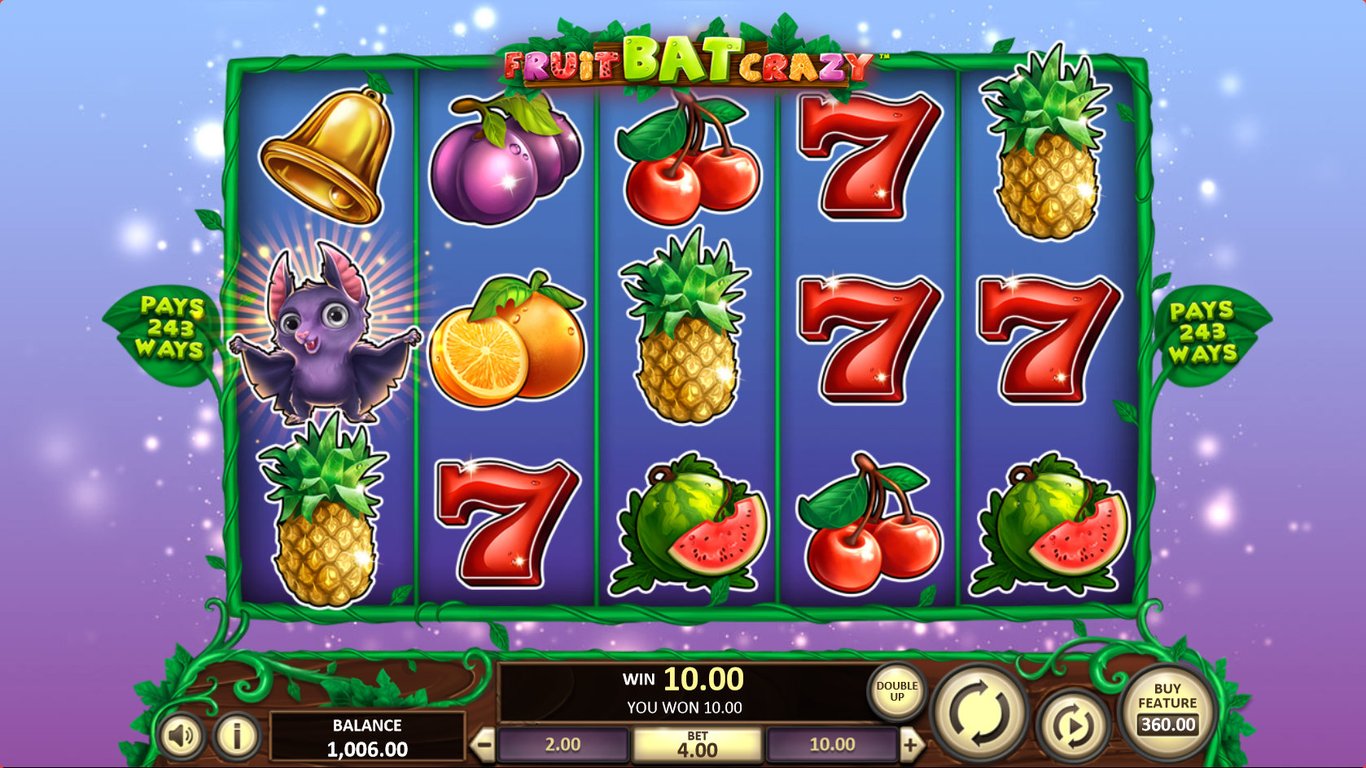 BetSoft has a new slot release, which looks like a classic-themed one. This fruit machine is called Fruitbat Crazy, and it is a game intended for those of you who want to invest a little and win a decent payout. The gameplay is pretty straightforward, with one or two twists.

As in many other fruit-themed slots, the Diamond is the Wild in Fruitbat Crazy. The Diamond will take part in winning combos as a substitute for all symbols other than the Bonus Buy Coin symbol and the Scatter. It is one of the symbols you will benefit the most of since it will be there for you when you're in need of one symbol to make a winning combo.

However, you will benefit the most by the Fruitbat symbol. This is the slots’ Scatter which pays the highest payout but also triggers the Free Spins feature. Now, you will benefit by this symbol since 3 to 15 Fruitbats can appear on the reels, giving you payouts of up to $10,000 for a screen filled with Fruitbats, and from 10 to 200 Free Spins, depending on how many of them you manage to land!

And the final twist in the gameplay is the Buy Feature. With the buy feature that costs up to 90x the stake, you can immediately buy your 20 Free Spins. However, with the Bonus Buy Coins, you can make the buy-in feature to zero, provided this symbol appears more than once on the reels.

You’re probably wondering what the ‘bat’ part of the title has to do with a fruit-themed slot. Well, as you load the game, you will notice that apart from the standard Red 7s, Diamonds, Golden Bells, and fruits such as Pineapples, Oranges, Watermelons, Cherries and Plums, there is also a tiny, cute-looking Bat symbol that can appear on the reels. The Fruitbat is the Scatter, as mentioned, and the highest-paying symbol.

There’s nothing special happening on the background of the reels, however, the reels present the fruit’s roots and leaves.

What’s really surprising here is that BetSoft has given a below average RTP for this game, of 95.22%. Nevertheless, 15 Fruitbats appearing on the reels will give you a $10,000.00 payout for the highest bet. BetSoft has set the maximum payout for this game at $47,850.00, which is not a lot, but it is good for low-rollers.

Fruitbat Crazy is not a game for everyone. If you’re in for some major payouts, we should tell you from the start that this is not the game for you. All you could win here is $47,850.00 tops, and nothing more. However, if you’re a low-roller, then you would enjoy this game. It gives you enough chances to improve your winnings until you get to the maximum payout of the game.