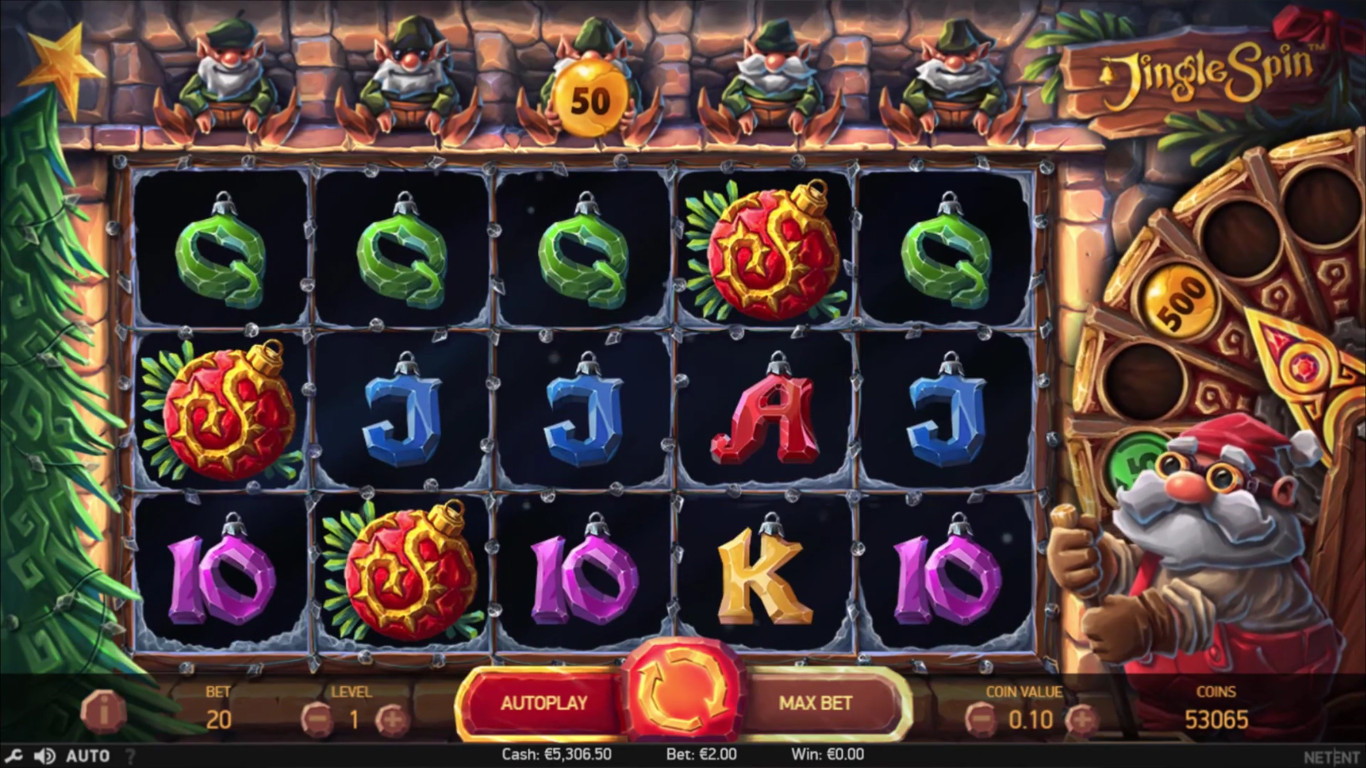 Christmas is just a few months away, and we’re already waiting for our gifts. NetEnt has prepared one for us, called Jingle Spin. Jingle Spin arrives just in time for the holiday season, and as expected from NetEnt, it bears a lot of presents and prizes. Santa’s here and so are his little helpers, they’re ready to give you the jolliest experience ever, so start spinning and collecting your rewards.

As you load the game, you will see that there is a wheel of fortune on the right of the reels. As Santa spins the wheel, the wheel sends a candy with prizes to the Elves, who’re lined up on top of the reels. The Elves keep the candies until the Wild appears. The Wild, which is a present box, opens up and the Elves throw the candy inside it, and the Wild appears stacked on the reels or gives you a huge payout.

The candies may contain a certain number of Free Spins as well, up to 50. During the spins, the Scatter, which is a big ornament with a golden S letter on it can give you a Mega Win. Needless to say, you get a certain prize for landing 3, 4 or 5 matching symbols on active paylines.

Santa and his little helpers are preparing the presents and decorating your tree in this slot game. The Christmas theme is presented beautifully, where Santa spins the reels and his little helpers are giving you the rewards. On the left side of the reels, you will see the Christmas tree with the golden star on top of it, while the background looks like a fireplace, where instead of fire you have the reels. As soon as you hit a winning combo, Christmas lights encircle the reel. The highest paying symbols are the Christmas ornaments, one with an orange and a cinnamon stick, another with a little horse on it, a green one, and one with a fir cone. Other symbols are the playing card symbols from 10 through A.

Since there's not much information disclosed, for now, we cannot say with certainty what the number of paylines will be for this slot, nor the minimum and maximum bet range. We’ll update the info as soon as we find out something new.

This slot is worth the wait since it has a pretty different layout than we're used to. Santa's little helpers that are sitting on top of the reels work as a team and keep your candies there until you get a winning combo, then stack your wilds or give you some big coin prizes. Santa spins the reels tirelessly, making sure you make a winning combo and when you do win something, you can see him pleasantly laughing. The theme is portrayed amazingly and from what we can see, the slot is paying out generously. There are a lot of Free Spins for grabs, which means the payouts could increase even more.