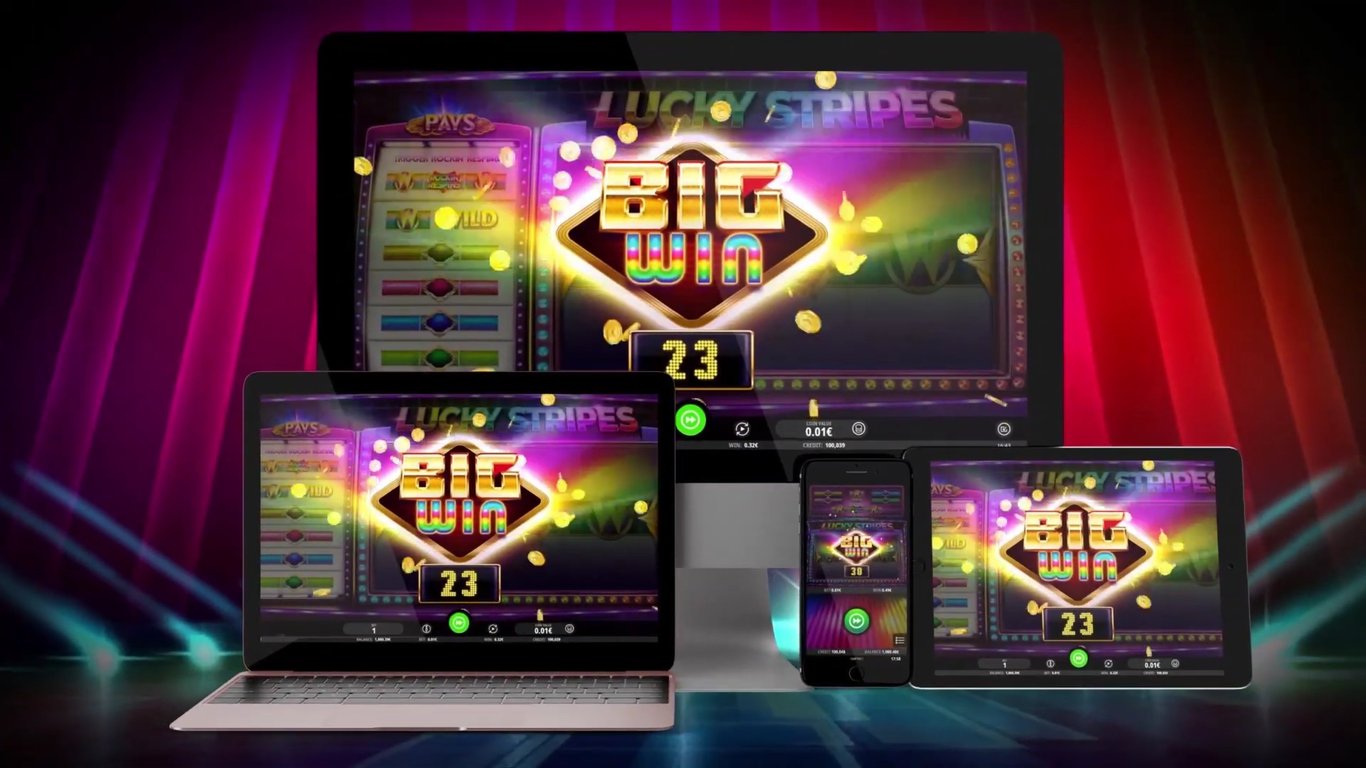 iSoftBet has a new slot release, and boy, oh boy, it is so refreshing! It offers 3 reels and only one payline! On this teeny tiny game area, so many things will happen. Lucky Stripes will bring colour to your life and, well, nice payouts!

On its one and only payline, Lucky Stripes will present to you the Wild Stripe. The Wild is the W symbol encircled with gold, with a golden, pink, blue and green in the background. The Wild Stripe will appear on the first and third reel only and will substitute for all stripes on the reels in the creation of winning combos.

2 Wilds on the reels along with the special Rockin’ Respins symbol will activate the Rockin’ Respins feature. For this feature, the second (middle) reel will respin multiple times, while the Wilds will stay Sticky on reels 1 and 3. The Collect symbol on the middle reel will end the feature, but the second reel can respin to a maximum of 30 Respins. But when the feature is active, the middle reel will display the different prizes you win, and when you press Collect, you see the total of coins that you’ve won for the duration of the Respins.

Even though you basically don’t see anything in the background, Lucky Stripes presents the classic theme, where you need to align symbols to form the perfect line. As you spin the reels, there are different bits of stripes rolling. As you form a winning combo, you get a whole, perfect, one-coloured stripe. On the left of the reels, you will see part of the classic-style paytable displayed, which although not letting you know how much you get for them, displays all the symbols and possible winning combos for you.

Therefore, let’s explain the symbols you will see on the reels, one by one. You get the lowest paying one, the Green Stripe. Then you get the Blue and Pink Stripes, and the Golden Stripe as the highest-paying one. The Wild is a standard one, presented with the letter W with all the coloured stripes in the background. There is a rainbow-coloured Bonus symbol that reads Rockin’ Respins.

The betting in Lucky Stripes starts at $0.01 and can go no more than $1.00. This is an incredibly small betting range, but then again, it suits the simplicity of the theme perfectly. You get a below average RTP for the game, as well, of 95.92%.

The highest-paying Golden Stripe gives you 100x the stake for a 3-of-a-kind combo, meaning $100.00. This means that for a small max bet of $1.00, you can win $100.00! Collect multiple wins like this and your payouts could grow easily, for one dollar bets! This is incredible, really!

In times where developers compete in which one will develop the most complex, uniquely themed and immersive slot that will appeal to the next generation of slots players, iSoftBet decides to surprise you with the simplest game ever!

The strangest thing is, tired from all those complicated gameplays and slots packed with special features, you’ll actually love the simplicity of Lucky Stripes. It looks like it came out of the blue to remind you that the simplest things make us the happiest. You may not get some massive payouts from it, but you’ll enjoy it either way. You’ll get small but frequent wins and you’ll have to bet just a $1.00 per spin, which is incredible. Try it, you’ll love it 100%.