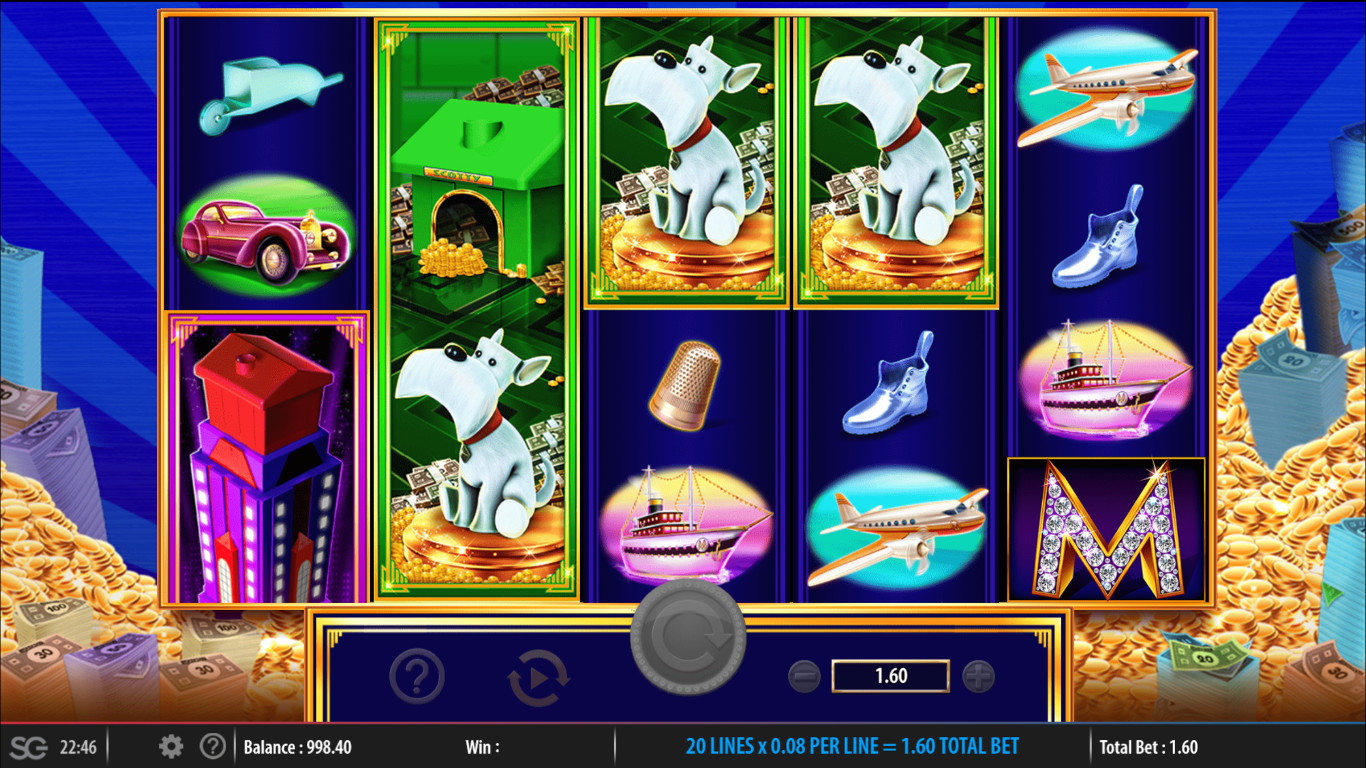 WMS parent Scientific Games has an extensive collection of Monopoly-themed slots, so this time WMS have decided to create one by themselves. The Monopoly Big Money Reel is their new slot release which has cartoony graphics, Monopoly-style, but with a lavish touch to it. The features you will encounter can significantly increase your winnings, hence the Big Money Reel addition to the game’s name. Grab your Monopoly pieces and prepare yourself for a lot of fun and suspense!

Monopoly Big Money Reel presents to you the four features that will boost your winnings. Before we go investigating them, let’s see what the symbols pay. You will find the diamond-coated letter M act as the Wild in the slot, which substitutes for all other symbols except for the Note symbols. A Hotel symbol, Mr. Monopoly and Scotty the dog appear stacked, where the Mr. Monopoly symbol can give you 7.5x your stake.

The Monopoly Big Money Reel Spin Bonus feature is triggered when any combo of 5 Note symbols lands on the reels. An access to 2 different bonus features, a multiplier boost or a spin on the wheel that can win you up to 250x your stake is up for grabs.

But wait! There is one more feature. The Utility Bonus feature gives you a chance to pick one Mr. Monopoly hand which can reveal a spin on the Big Money Reel, Collect or Collect x2. If you get to spin the wheel of fortune, you can get a cash prize or multipliers. If you get multipliers, they will be active until you land on a Collect x2 or Collect.

And finally, there is the fourth feature, the Go Free Spins Bonus feature, where you get rewarded with 8 spins to start with. Now, landing a Go symbol will give you a Note symbol, which will then change all Note symbols in that specific Note on each of the free spins. After you collect the corresponding reward, you get a chance to win additional free spins and cash bonuses.

Everyone wants to turn around the Monopoly board from time to time, regardless of their age. Playing board games never gets boring. That is why Monopoly-themed slots arouse interest in so many slot players. This particular slot, as mentioned, has cartoony graphics, a relaxing jazz tone in the background and regular Monopoly symbols like wheelbarrows, thimbles, top hats, cars, boots, airplanes, and boats. There are the Mr. Monopoly and Scotty the dog additionally contributing to the theme. Visually, the slot is appealing and it was designed beautifully.

There are 20 paylines in the slot, with the minimum bet of $0.20 and the maximum of $500.00. Assuming you don’t trigger any feature, the maximum jackpot will be 100x your stake. However, with the multipliers and Free Spins, there’s a lot more for grabs. The 5 Wilds alone can reward you with 2000 credits. The largest multiplier is 250x but there are so many smaller ones that are not to be taken for granted as well. With a maximum reward of 10,000 credits and a solid RTP of 96%, the game has a pretty nice payout potential.

Monopoly is a board game that never gets outdated. Finding new slots that feature the Monopoly theme always cheers up slot players, because of the familiarity. They recognize the gameplay and the special features come as a very pleasant surprise, mainly due to the payouts they provide. In short, this game has met all the criteria to become one of your favorite slot games, so don't hesitate to try it.