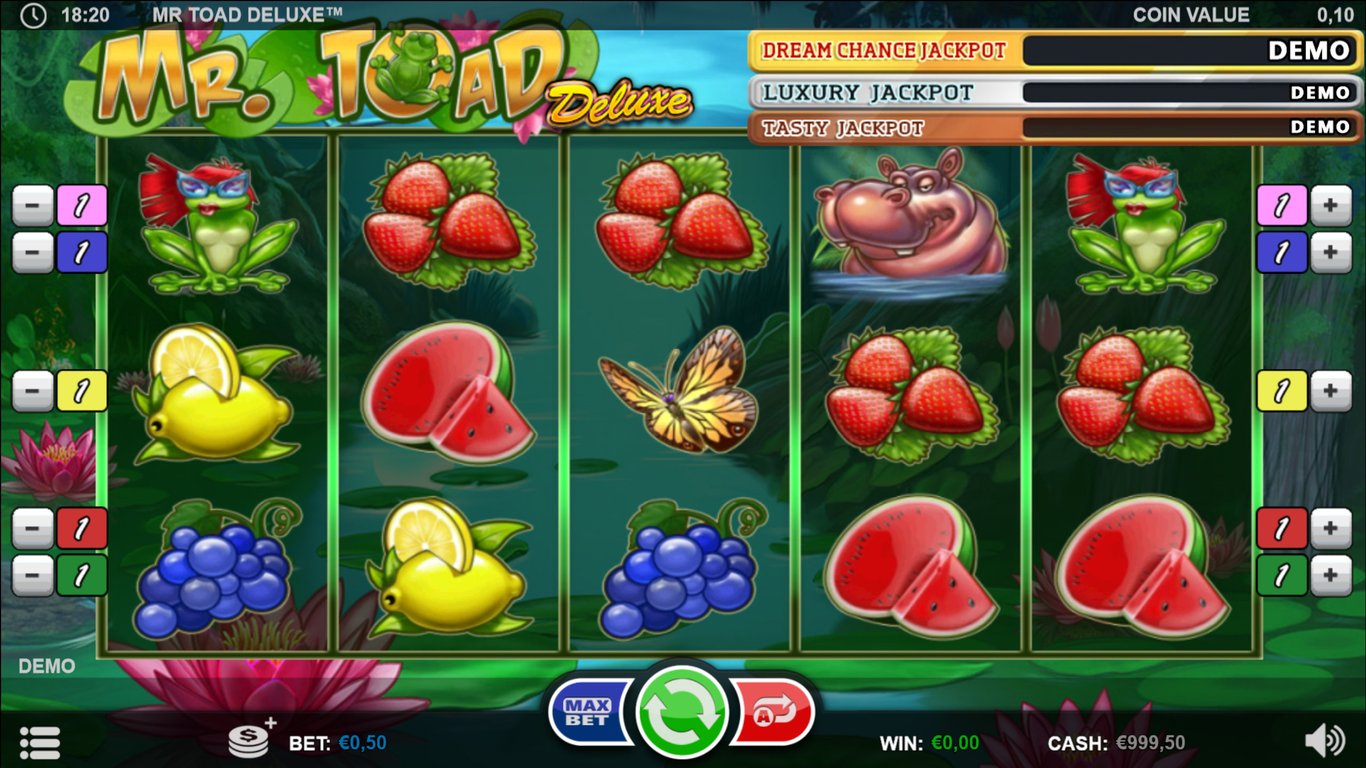 Mr. Toad Deluxe is a new online video slot by Play’n GO. It is a cute-looking slot which features a humoristic story of a male frog which is obviously in love with the female frog. There is also the hippo waiting eagerly to grab one of them. The slot is colourful, presented with neat graphics and it offers a nice RTP.

The game features some fairly unique features, and these are all related to Mr. Toad. But before we go into detail, you should know that the winning combos pay from either side.

Since frogs eat butterflies, it should not be so shocking for you that Mr. Toad will eat the Butterfly symbols found to its right. Mrs. Toad will do the same, but with the Butterflies found to the left. This fitting feature will give you a payout of 10x the stake.

You will need to land three consecutive Lotus Flowers in order to trigger the Bonus Game. If you manage to land more than three, you will get bigger prizes in the feature.

The Bonus Game involves Mr. Toad again. You will need to help Mr. Toad cross the swamp, picking the lily pads on which Mr. Toad jumps. If Mr. Toad gets caught by the hippo, the feature ends. You can get the highest payout from this Bonus Game, the 110x the stake payout.

But, there’s also a Jackpot Wheel! You will find 3 versions of it, and you will get different payouts out of the three wheels. One spin on the lowest-paying wheel can be a useful upgrade to the next wheel. So keep on spinning until you hit the wheel that’s highest-paying.

Mr. Toad is the sweetest character you’ve seen in slots lately, looking at his Mrs. Toad with so much love in his eyes. She, on the other hand, has long red hair but looks cranky and somewhat angry, maybe because of the blue glasses she wears. The hippo is smiling, waiting patiently for the frogs to make a mistake so he could finish them. Other than these three, you will find strawberries, blueberries, watermelons, lemons and butterflies on the reels, as well as the lotus flower. In the background, you will see the swamp where the frogs live.

To play Mr. Toad, you can change the number of lines you want to play with as well as the coin value. You can play with as little as $0.01, meaning one payline. But the betting can go up to $10.00, meaning $2.00 per line for the 5 paylines offered in the slot.

Since the betting range is so low, it is evident that the base game will not offer some impressive payouts. You will actually get up to 150 coins per line for the best combo, which translates to $300.00 per line. For 5 paylines active the slot can pay you a maximum of $1,500.00.

However, the RTP is quite nice, 96.95%, and there are 3 progressive jackpots attached to the game, which is awesome. You could hit them for a bet of $10.00. That would be amazing, right?

At first, we were discouraged by the low payouts the game gives, but then we realized that this is the perfect game for those players that want to get an access to progressive jackpots playing a game with a simple gameplay and low betting range. That’s right, you get a game that can take you to huge jackpots for as little as $10.00. If you’re in for the jackpots, then try Mr. Toad Deluxe; it’s humoristic, it’s colourful and it has interesting special features.