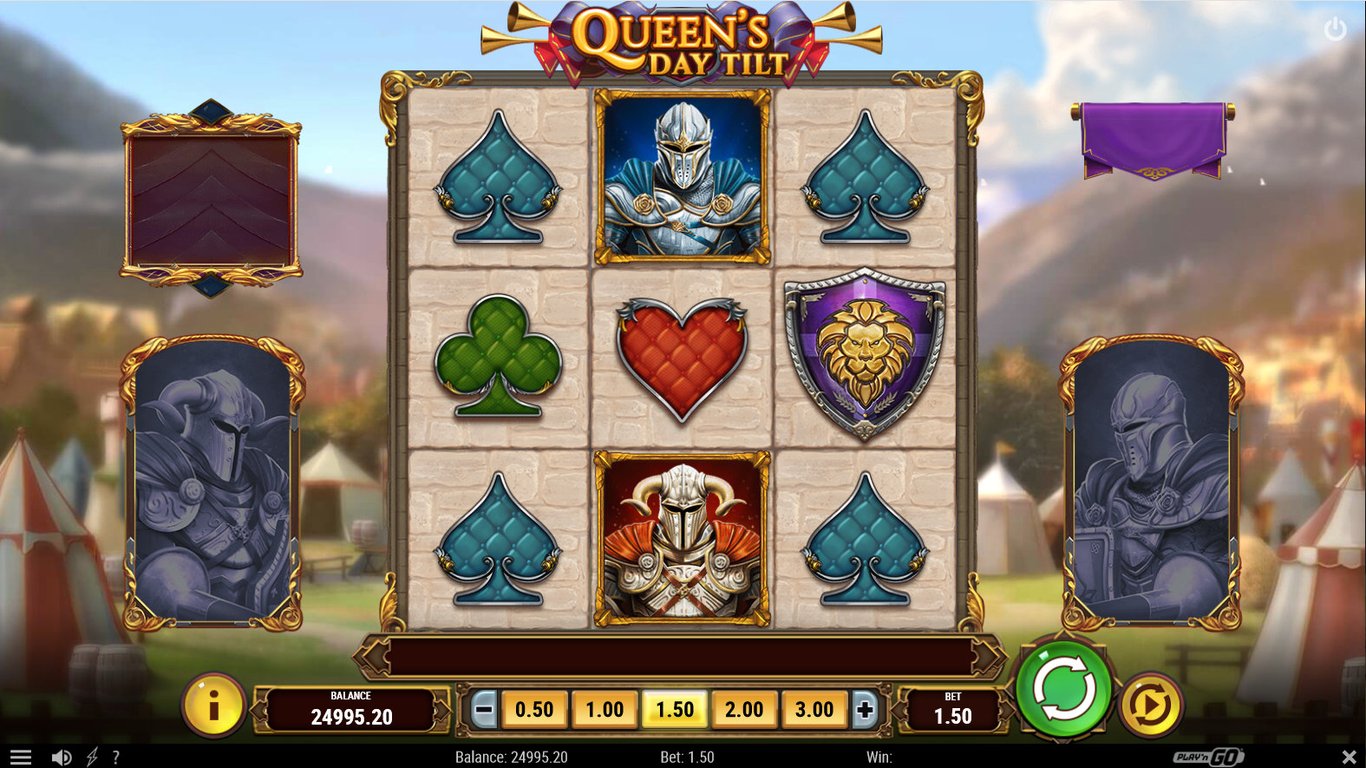 Play’n GO has a new slot release with a very unusual grid and gameplay. Queens Day Tilt is an unconventional slot that features 3 reels but has only one payline. However, this payline will give you some major payouts through its many features and will really give you some great gaming time.

Even though Queens Day Tilt is not a typical 3-reeled slot, you should still expect the standard features. The first familiar feature you will find on the reels is the Wild.

The Wild is the Queen symbol which will help you in the formation of winning combos whenever it appears next to matching symbols. However, you will get the most of the Wild when it forms its own win. This is when you get 8x the stake payout.

Now, the things get interesting when you land a three-of-a-kind combo. This is when the middle reel gets transformed into a Wild Reel.

There is another feature that gets activated randomly, called Ruler. This feature will give you one Queen symbol. This Wild will be given to you during rounds where you have not already formed a win.

There are two high-paying symbols in this slot. When you form winning combos with both of these symbols, you get 1 Free Spin with only Knight symbols present on the reels.

And finally, you have the Queen’s Day Free Spins feature during which you will get the best wins. You will initially get 5 Free Spins with only high-paying symbols present on the reels. In addition, you will get a 2x Multiplier which will continue increasing as you form winning combos with both of the high-paying symbols in one same round. Even if you don’t form a win, you will get a chance for a payout since the Ruler feature will automatically activate.

The 3 reels might suggest that the theme in the slot is a classic one, however, as you load the game you will see that it was inspired by the medieval times. You will see symbols like Knights, Queens, shields, as well as card suits.

You will notice that the game has a beautiful design, and this is only normal given it was developed by Play’n GO. You will really enjoy what you’re seeing, and you will definitely love the gameplay.

Considering there is only one payline in the slot, the wagering will start from $0.10 and can go up to $100.00 per spin.

Payout-wise, we mentioned that three-of-a-kind Wilds give you the best payout from regular wins, the 8x the stake payout, which translates to $800.00 for the max bet. However, when Free Spins are active, with the increasing Multipliers, you can get to up to 5,000x the stake payout, which means you can get $500,000.00 as the highest payout potential. For an awesome RTP of 96.97%, we can definitely say that Queens Day Tilt is a rather rewarding game.

Queens Day Tilt is a real refreshment when it comes to slot releases. Play’n GO has really done a great job with it. It has an above-average RTP, half a million for grabs and it features some really interesting special features. It looks great visually, as well. It gives you the chance to play a simpler, 3-reeled slot with a beautiful design, modern features and awesome payouts.