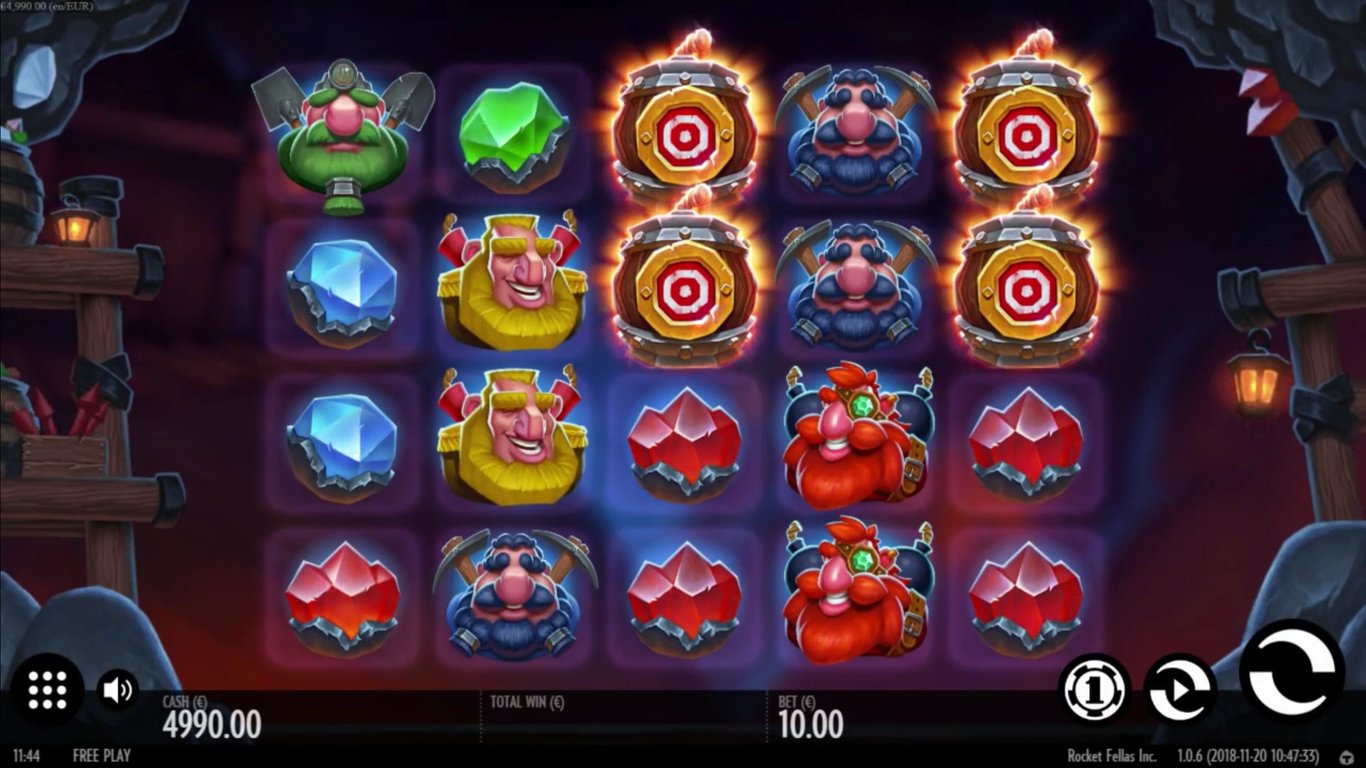 It has been several months since Thunderkick’s last slot release, but a new one is finally here. The Rocket Fellas Inc was absolutely worth the wait, and soon you will discover why.

The game will provide you with several unique features, fun characters and animations, and some pretty impressive graphics. It is dynamic, it has rhythm and will definitely put you in adventure mode. Thunderkick has proved once again that their hard work pays off.

The first thing you should know is that the symbols can appear stacked on the reels. This means that you can potentially fill up the entire screen with matching symbols and form 30 winning combos. This way, the most you can win is 900x the stake in a single round!

Now, let’s focus on the Wild symbol. The Wild is actually presented with a crate containing multi-coloured jewels, which will pay 30x for each and every one of the formations it forms. It can, obviously, replace for other symbols on the reels in the formation of winning combos.

However, the feature that plays the crucial role here is the Rocket feature. This feature will give you rockets on the leftmost reel, at random. That position then becomes a Wild, as well the highest-paying Barrel symbols. Then, the reels where those Barrels were found transform all other Barrels into Wilds as well. At a certain point, you can end up with a screen filled with the highest-paying symbols in the game!

Don't be disappointed, the features don't stop here. You also have your all-favourite Free Spins. These are activated with the aid of the Iron Fist Scatter symbols. You will need to land 3 to 5 Iron Fists in order to get from 10 to 20 Free Spins. The feature can be retriggered. During the Free Spins, additional features will appear, the Sticky Wilds and the Hot Reels. All these combined can provide you with the maximum payout of 7,325x the stake!

At first glance, you will see the cute, caricature-looking dwarfs with huge noses. These dwarfs will instantly remind you of those that were present in the Hobbit movie series. You have a blond one, a red one, a blue, and a green dwarf, as well as an orange, blue, green and red gems. In the background, you will see the entrance of the mine, and behind each of the dwarfs, you will see their tools for mining. Some of them even use explosives!

As mentioned, you should expect rewards like 30x the stake for 5-of-a-kind Wilds, 900x the stake per a single round for a screen filled with matching symbols and the maximum payout of 7,325x the stake during the Free Spins. This means that for a maximum payout of $100.00 you could actually win up to $732,500.00! For a decent RTP of 96.10%, it is safe to say that the slot is a must!

As you would expect from Thunderkick, the slot looks flawless. It has all the right ingredients to become your next favourite slot. It is visually appealing, it provides you with some major payouts and it has a sense of humour presented via the animations and symbols. If you still haven’t tried it, you better hurry up and try it, because you’re missing out a lot of fun!