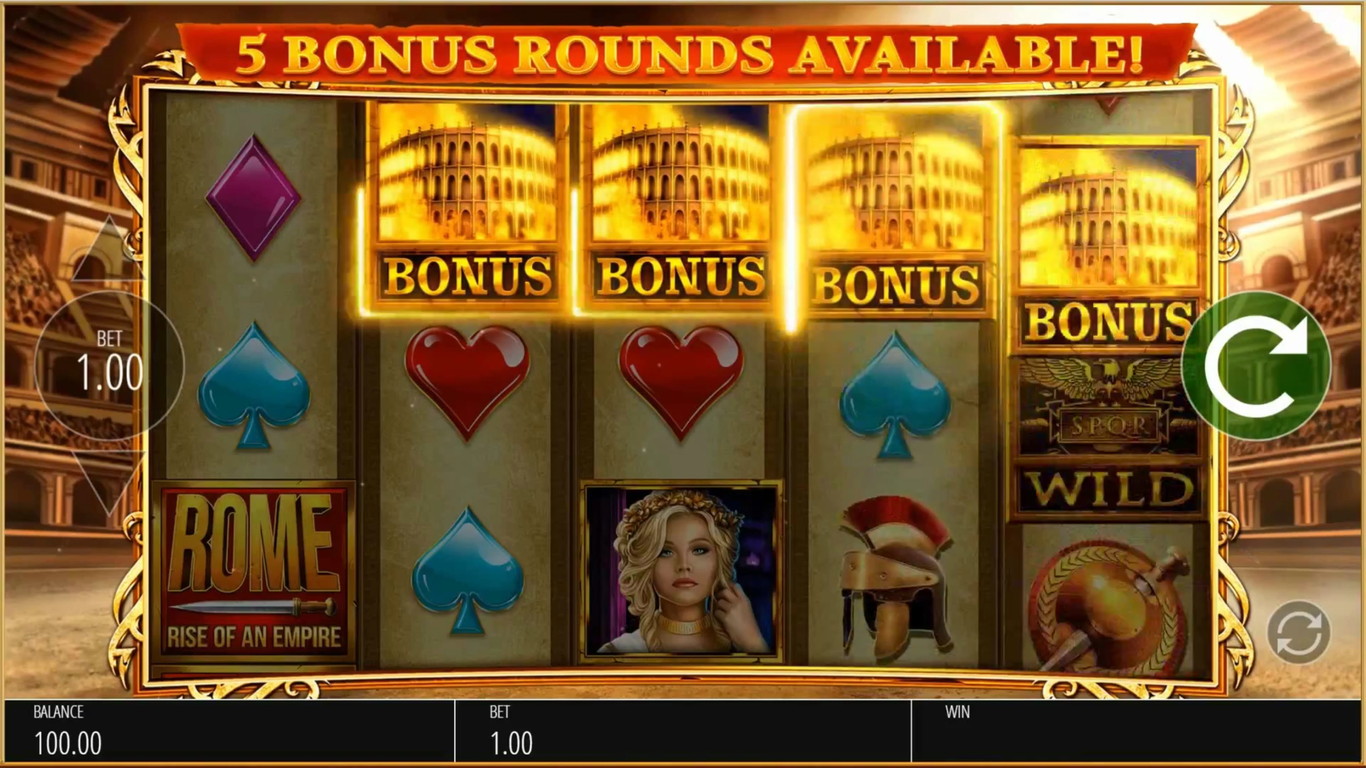 Blueprint has surprised us with another new slot release, this one an Ancient Rome-themed one. It is called Rome: Rise of an Empire. You should expect a slot filled with features, rich graphics, and some awesome payouts. If you’re in for a feature-packed, Roman-themed and action-filled slot, you should check this one out.

As announced, there are tons of features you will find in this slot and you’re going to love them. Let’s start with the simplest one, the Wild, which is the modern-day official emblem of Rome, and the ancient Roman Republic emblem. It can be used as a substitute for regular symbols. Another way to benefit from it is if you manage to create a combo of Wilds alone, no other regular symbols, and this is when you get the jackpot.

Now, get prepared for action. There are 5 modifiers in this slot, random features that can appear as soon as the Tiger symbol appears on the reels. One of them is the Bonus Boost that can give you extra Scatters on the reels. Another one is the Symbolus Maximum that transforms regular symbols into Multiplier Wilds, and then you have the Legion’s Glory that adds 1 to 3 Stacked Wilds. The next one is the Sword Strike which gives you symbol drops after it slashes the existing symbols on the reels away. And finally, you have the Spears of Destiny modifier that gives you Free Spins that will last as long as you need to boost your winnings.

The Scattered Bonus Symbols, more precisely, three of them in a round will trigger the Bonus Wheel. Once you trigger this bonus game, you get 5 more modifiers to trigger.

The Urn Riches is one that can give you multipliers, an access to the Big Money Bonus or upgrades; all you have to do is pick one. The next feature is the Uprising, which can give you a cash prize. The third one is the Volcanic Cash that gives you up to 5x multipliers in all other rounds or up to 10x in the final round or Free Spins. The Empress Treasure will offer you 15 Free Games and Expanding Wilds. The Expanding Wilds can be locked or you can replace them for a cash prize. And finally, the Big Money Bonus for which you can get an access with the Urn Riches feature is a picking modifier where you can get huge payouts.

Since the slot is Roman-themed, you will find helmets, shields, gladiators, swords, and of course, the setting will be in the Colosseum. The Empress is mesmerizing, portrayed with absolute beauty. Other symbols include playing card suits, which are the lowest-paying symbols. The theme, although very common, is decently depicted, while the graphics are with high-quality.

Rome: Rise of an Empire will give you a solid bet range, one that starts with $0.20. The maximum bet you can make is $500.00. The top calculated prize is $25,000.00 per a single round, however, since the gameplay offers so many features, modifiers, and multipliers, you can expect a lot more than that.

The variety of features is what makes this slot very powerful. Although the top payout doesn’t seem that appealing, you can never know what the special features can bring you. The Free Spins, Stacked Wilds, multipliers, Expanding Wilds, Multiplier Wilds, and all the possible cash prizes are more than worth the trouble of trying this dynamic slot.