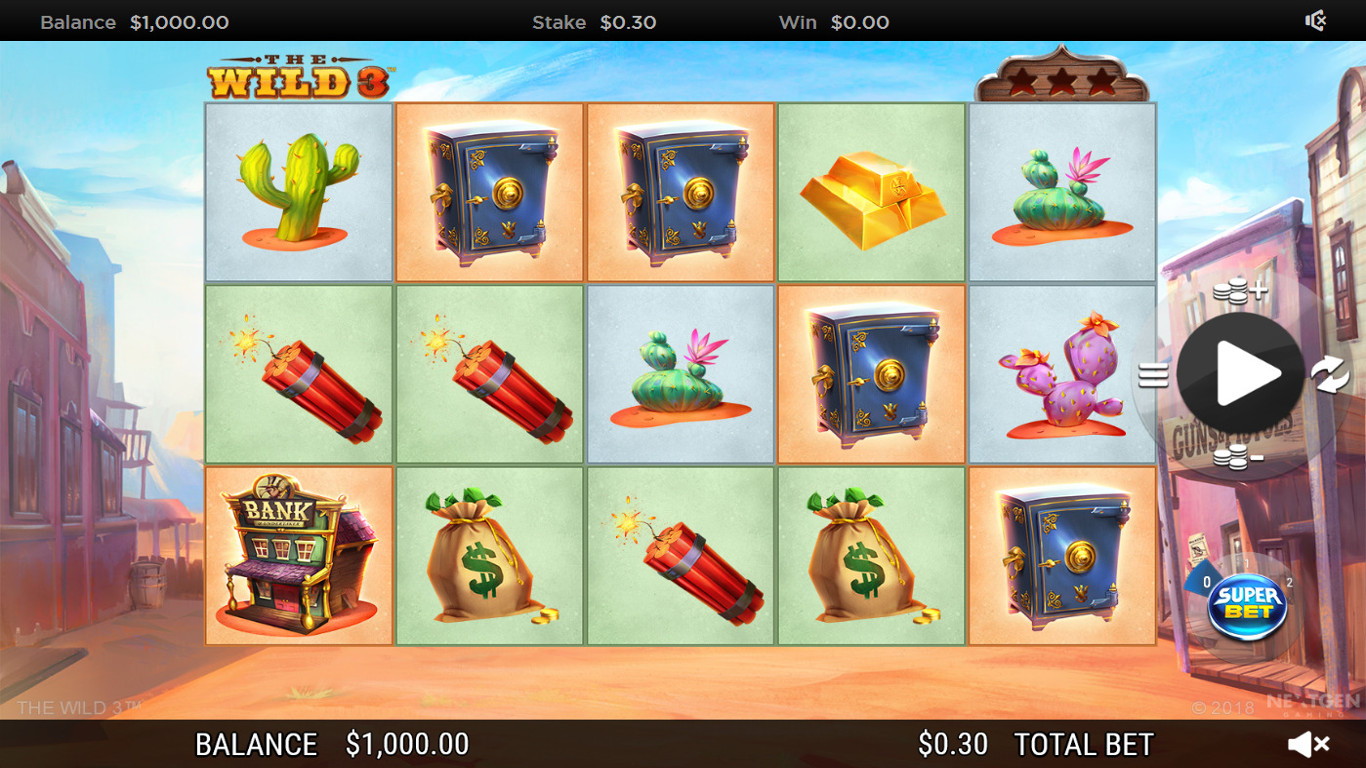 The brand new Wild West-themed slot by NextGen is called The Wild 3. The game takes players on different missions, it is filled with action and it is quite engaging. There are several unique features and symbols that include dynamite sticks, cacti, money bags, a bank, a safe, gold, which contribute to the good ol’ Wild West.

When the Wild Bull appears on the third reel, all the wins containing wilds in them can be multiplied by 2x, 3x, 5x, or 10x.

The Wild Coyotes can also appear on the third reel, and when they do, they transform all cactus icons into additional Wilds. Having in mind that there are three different cacti, this feature is pretty awesome.

The third Wild is the Wild Racoon. The Racoon also appears on the third reel and can substitute regular symbols with wilds, with the aim of making a winning combo.

The three types of Wild features can even be triggered simultaneously if they happen to appear on the third reel at the same time.

There is also the Lock N Load Respins feature which is triggered when the Wanted Bonus symbol lands on reels 2 and 4, but when there are no wilds on the reel 3. After this feature is activated, if a wild appears on the reel 3, it triggers the free games and you get an extra free spin.

Within the free games, you get 5 free spins, you get wilds landing randomly and transforming into sticky wilds.

A SuperBet feature, a popular feature in many NextGen slots, gives you a chance for an extra wager. Also, you can play 3 different missions and trigger the Rob the Rich feature.

The Rob the Rich feature gives you a chance to pick three out of 15 money bags and get a cash prize, 2 more picks or a mystery symbol that can give you a cash prize from 5 up to 100 times your stake.

Although we have seen the Wild West theme in many slot games, The Wild 3 features animal characters instead of humans, so it is somehow cute and special because of that. You will see a picture of Peaceville in the background, a place deserted by the villain Voltimer Vulture. Three good guys T-Bone, El Loco, and Five Star are rising up against him and the injustice. The cacti symbols, the bombs, the money bags and other symbols characteristic for the Wild West give the game an additional West touch.

The Wild 3 has 5 reels and 10 paylines. It is a highly volatile slot offering payouts up to 25,020 times your initial bet on each spin. Considering this, you should expect huge payouts. In addition, the game gives a RTP of 96.78%, which is more than enough. With a minimum bet of £0.1 and a maximum bet of £200, it suits anyone’s pocket, and the wide choice of features can give great wins to any player.

We have really missed slots with a lot of features that can entice our gaming experience. The Wild 3 slot is beyond enticing and immersive, and the payouts are more than great. We highly recommend it to any slots admirer, as the game is full with action and guarantees a splendid gaming time.