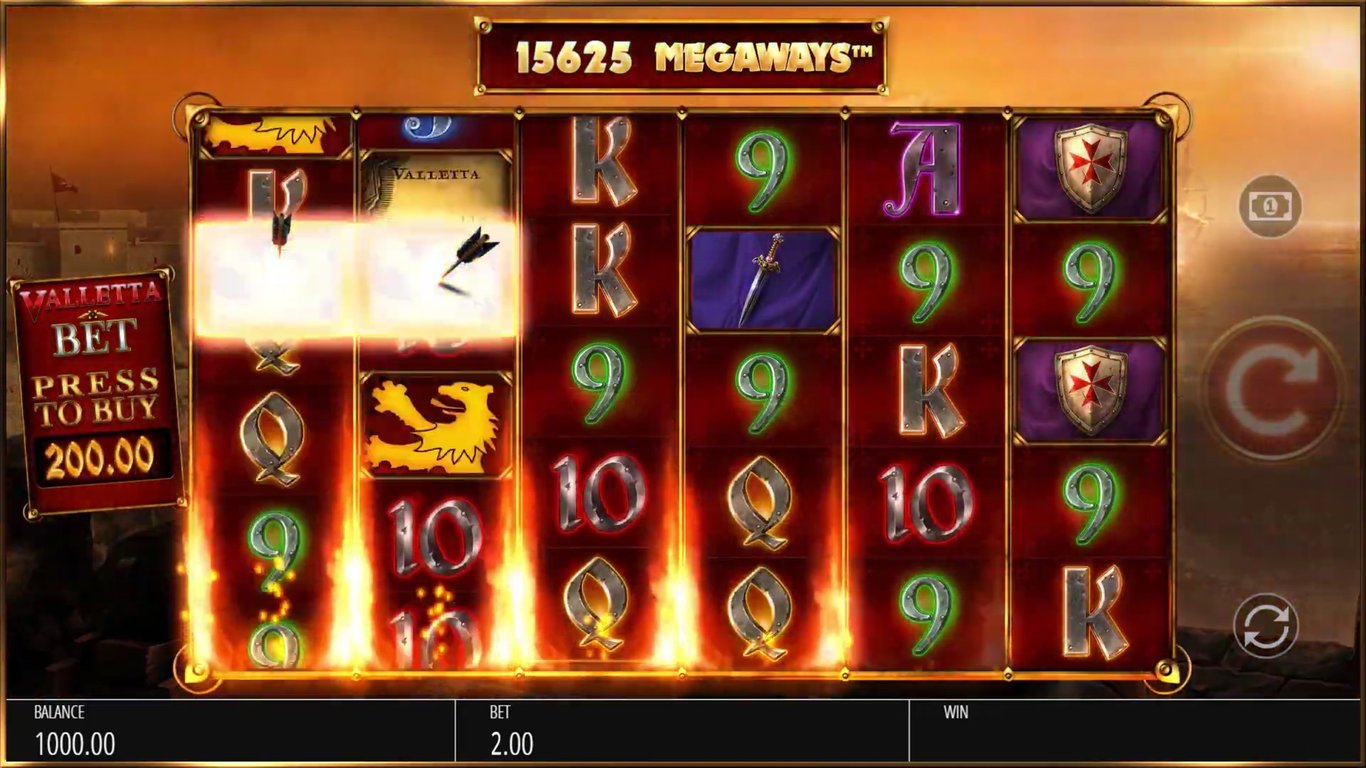 Blueprint Gaming has released a new slot called Valletta: Megaways. Valletta is the capital city of Malta, and the developer found inspiration in the Great Siege of Malta in the year of 1565, presenting to you the battles the city needed to go through in those difficult times. The slot features Big Time Gaming’s Megaways system and provides you with up to 15,625 ways to win.

The Wild in the slot is a medieval Knight, which substitutes for any symbol on the reels, except for the Scatter.

The Bonus symbol presented with a cannon takes the role of a Scatter in Valletta: Megaways. Landing more than two Scatters, you will trigger the Free Spins feature. With three Scatters, you trigger 10 Free Spins.

During the Free Spins, any win you form can trigger the Valletta Streak feature. This feature adds Wild symbols on the reels randomly on any spin. In addition, on any winning spin, the Arrow Storm feature can be randomly triggered. Once triggered, arrows are thrown on the reels, and they hit certain symbols. Those symbols become Sticky and the reels they are found on stop spinning, while other reels Respin for a better chance to win. If you get two matching Sticky symbols with the Arrow Storm, and another one appears due to the Respins, you get great rewards.

If you buy the Bonus Bet, you could get more ways to win. The Bet Bonus is an additional bet and gives you up to 15,625 Megaways. As you know by now, the Megaways system allows more symbols on the reels and more ways for you to win some glorious payouts.

Valletta: Megaways obviously features a war theme. From the minute you load the game, you can see a huge castle being attacked. The Island of Malta was actually invaded by the Ottoman Empire, and close to 2,000 soldiers and approximately 400 of Maltese citizens, men, women, children repelled the invaders. This was a historical, epic battle that resulted in Malta’s victory, is remembered to this day, so Blueprint developed a slot in honour of it.

There is fire everywhere, and knights and spears. You can see banners in the background and on the reels. You can see cannons, swords and shields on the reels, as well as a letter that reads Valletta. For the lowest-paying symbols, you can see the playing card royals.

Since there are no actual paylines in Valletta: Megaways, you get Blueprint’s standard betting range. The smallest bet you could make is $0.10, while the highest one is $10.00.

You should expect an average payout and lots of chances to win big. When the Megaways system is involved, you know that there are some impressive payouts to be won. With all the special features and the 15,625 ways to win, Valletta: Megaways seems like a pretty exciting and rewarding game to play.

Valletta: Megaways tells an important story from the Maltese history, therefore, we can give Blueprint credit for the uniqueness of the theme and the design of it. The gameplay is exciting and there are plenty of ways for you to achieve multiple winning combos. We would recommend it to any player since the graphics are impressive and the payout potential is great.