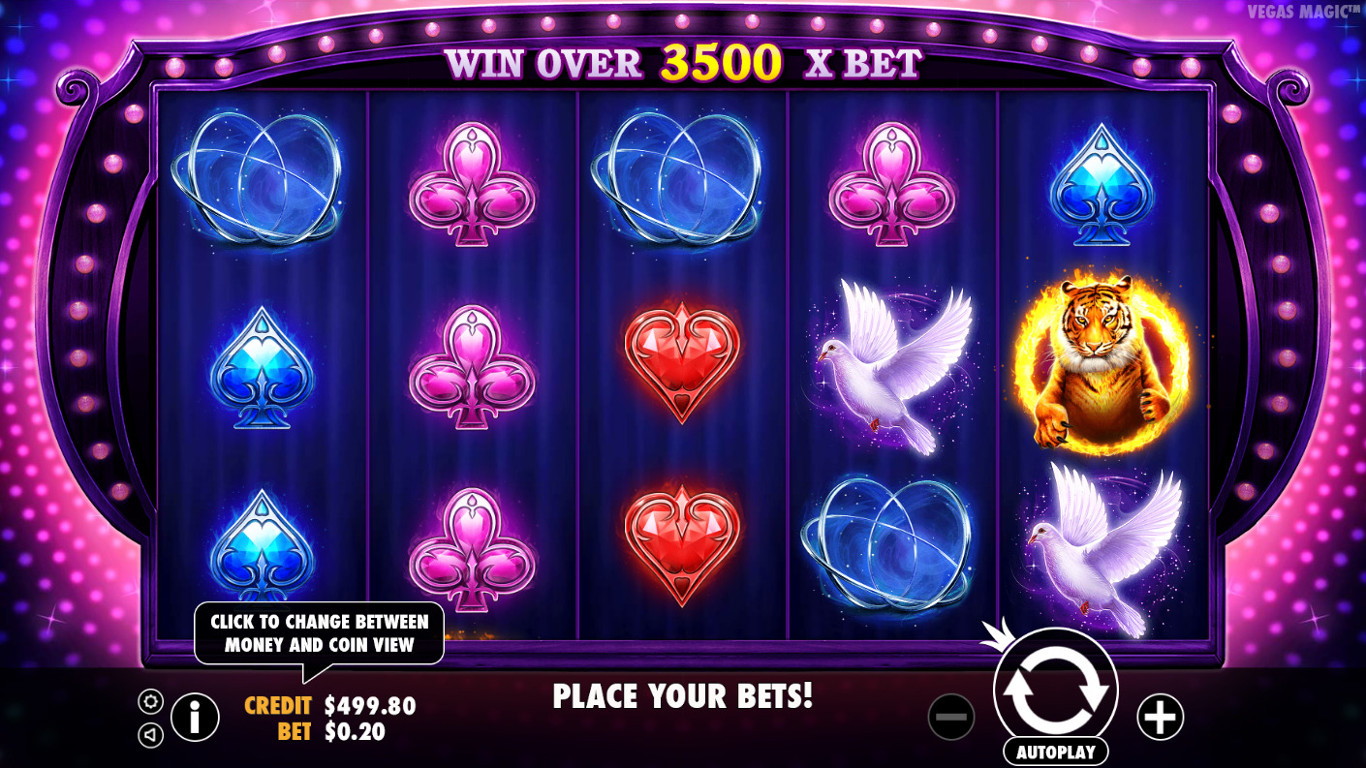 Although the Vegas theme is probably one of the most common, it is always interesting. The latest addition to the Pragmatic Play's game selection, Vegas Magic slot machine features the Vegas theme but incorporates some magic elements. Sure, there are magicians in Vegas, so that is nothing new. But, there are no magicians like this one, who does a great job in providing players with some really special features and symbols.

There is a refreshing feature in the Vegas Magic slot, something that you don’t see that often. It is called the Tumble Feature. When winning combinations are paid after every spin, the winning symbols are removed from the reels. Then, new symbols fall from above and fill the empty positions on the reels. If you get another winning combination, you get paid for it and a Win Multiplier appears, which starts at 2x and can increase by 1 after each of the next tumble. The feature is active as long as there are winning combinations as a result of the tumble, with no limits. This means that there is no limit on how much the multiplier can increase.

The Wild symbol is the Magician himself. The wild substitutes for all symbols bar the scatter. Though it can only appear on the second, third and fourth reel, during the tumble cycle, when the wild appears for the first time and there is a win, it expands to fill the entire reel vertically. This doesn’t happen when it appears for the second time. The Scatter symbol is a purple dollar symbol, which can appear on all reels and pay on any position.

This game will present you with a real magic spectacle. You will get neon lights in the background, and a white dove, a tiger in a ring, a female magician or the magician’s helper, the magician’s hat and playing card suits with a magic glow. All of the symbols contribute to the atmosphere of a magic show and the magic theme. The visuals are impeccable, as well as the sound effects.

The coin value per line is $0.01, and since there are 20 lines, the minimum bet is $0.20. The maximum bet, though, is $500.00. Considering the abovementioned multipliers and the maximum bet, there are some quite big payouts for grabs in this game. In addition, the tumble feature can increase the multipliers even further, meaning boost your winnings even more. There is a potential payout of over 3,500x the stake and the RTP is 96.08%, which is more than awesome.

Having in mind that this is a medium volatile slot, the game is a frequently rewarding one. It has a nice design, impressive graphics, and the theme is well worked out. There is a great winning potential and the Tumble Feature can give some incredible payouts, considering the never-ending multipliers. In all, the Vegas Magic slot is a type of game that can appeal to any slots player that is interested in magical payouts and a lot of fun.