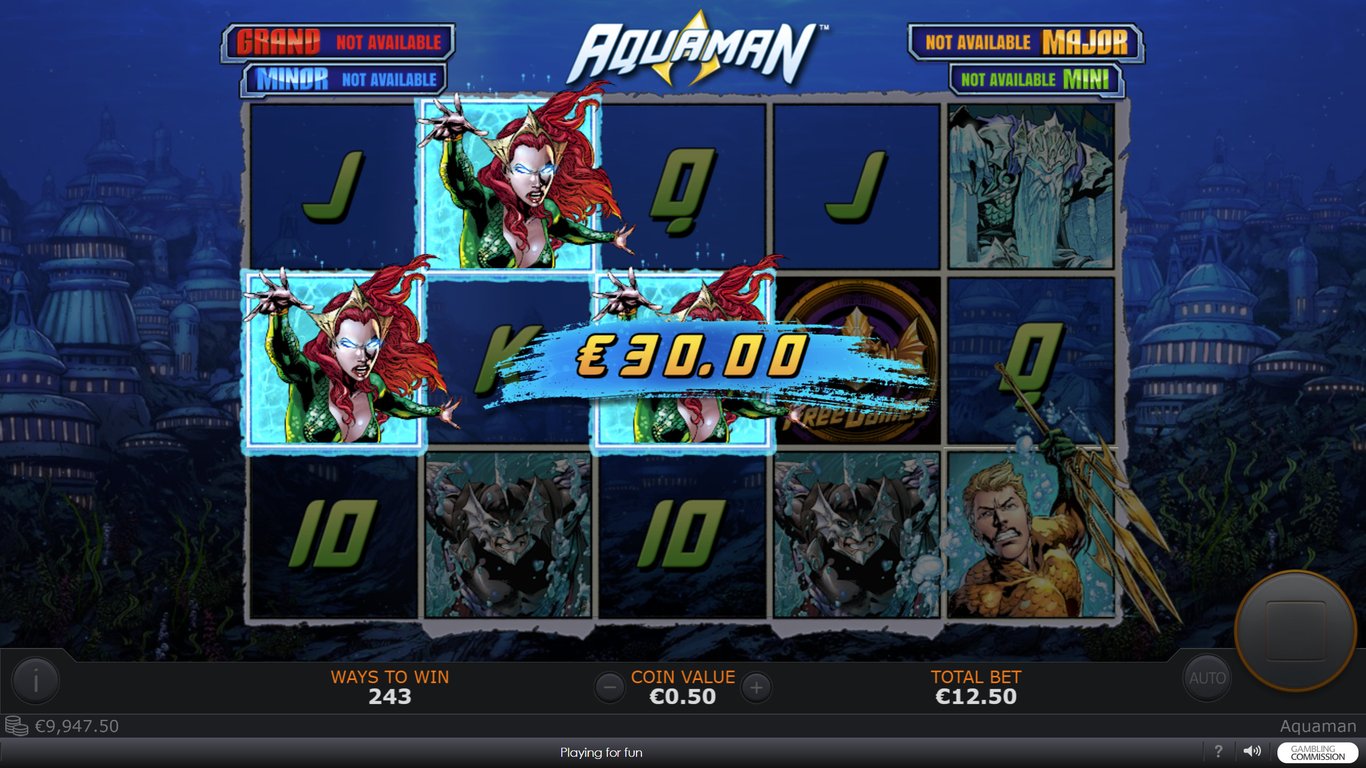 Any DC Comics fan would be psyched with the newest release by Playtech. If you’re eager to play the AquaMan slot, then your wait is over. AquaMan is the latest addition to the comics-themed slots by Playtech which is their branded selection of slots. You should expect aquatic adventures, huge jackpots, and many features.

Of course, the King of Atlantis is recognizable for its Trident. The Trident here is the Wild symbol, the one that plays a significant role in the slot. It can replace for regular symbols in winning combos, however, it cannot substitute the Scatters.

Mera, the red-haired warrior, can also appear stacked, covering the entire fourth reel, and activate the next feature, the Ocean Rush Respins. Here, one random symbol is chosen to become sticky.

As you can see so far, there are a lot of Respins in this game, but there are also Free Spins, which actually give the highest payouts. Three, four or five Scatter symbols will give you 8, 12 or 16 Free Spins, respectively. During the Free Spins, by collecting Golden AquaMan symbols, certain villain symbols will transform into AquaMan symbols, increasing the winning potential up the roof. If by any chance, you've managed to land a Wild as part of the winning combo, you get 2x, 3x or 4x multiplier added to your winnings.

If you manage to get the entire screen filled with AquaMan symbols, you get the game’s maximum potential during the Free Spins feature, up to 2,000x the stake. However, the multiplier must be 4x for you to get this chance of winning the maximum payout.

Based on a DC Comics superhero AquaMan, the King of Atlantis, the underwater king or however you want to call it, is the protagonist in the slot. He’s accompanied by the red-haired warrior Mera in the fight against 3 villains. You have the King’s Trident as the Wild. The lesser paying symbols are the Royals.

If you were hoping of getting a peak from the upcoming AquaMan movie, you’re wasting your time. The slot draws inspiration from the comic books, so the characters and other symbols are portrayed with comic graphics.

You may try AquaMan for $0.25 since it is the minimum bet, but you can also go all in and bet $500.00, which is the maximum bet. For 243 winning ways, you could get a lot of winning combos with that kind of money.

Regardless of whether you’re a DC Comics fan, you’re going to love AquaMan slot for its payouts. There are the four progressive jackpots available, but the maximum payout of 2,000 the stake from the base game and the special features is not to be underestimated as well. The graphics, typically for Playtech, are stunning, as well as the characters.