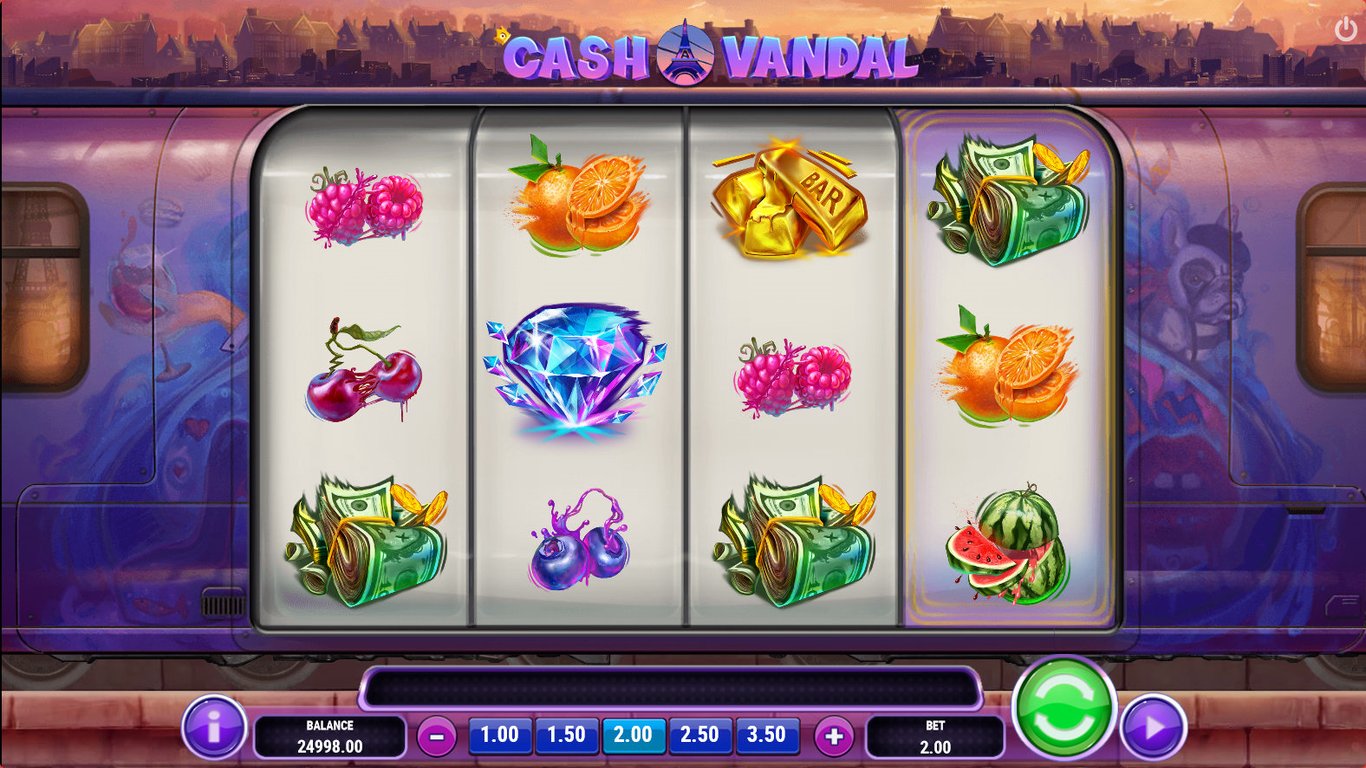 Play’n GO’s latest release will take you to a futuristic, graffiti-filled spree of wreaking havoc in the subway. The minute you load the game, you will see that it is an ultra-modern one, which takes you on subway adventure. The graphics artwork by Play’n GO will definitely remind you of a mobile game we used to play a decade or so ago, Subway Surfers. And sure, just as you loved that game, you will instantly fall in love with this one as well. Check out Cash Vandal and wake the rebellious child in you up.

You will instantly notice that the setup in this game is rather unusual, featuring 4 reels instead of 3 or 5 and giving you the chance to bet on 10 paylines. With this, Play’n GO has probably tried to capture the rebel-style theme, and rebel against the boring 3-reel and 5-reel slots. Another thing you will notice is that all symbols on the reels are drawn in graffiti style, and you will love this detail.

The Wild graffiti, presented with yellow and orange colours, apart from being the highest paying symbol, will replace regular symbols in the creation of winning combos.

Now, as its name implies, the City feature takes part in one of the three most popular and most visited metropolises in the world, Paris, London and Berlin. As you trigger the feature, you get 1 Free Game and the fourth reel filled with Wilds, along with another modifier. If you get the Berlin modifier, you get two to three extra Wilds added on the first three reels. If you get London, you get up to 9 Mystery symbols on the first three reels which at the end of the spin transform into matching symbols, and if you get Paris, you get Mega symbols sized 2x2 on the first two reels.

Free Spins, which are triggered with the Spray Can on 4th reel and 2 other reels, gives you 5 to 10 Free Spins. Here, you get to choose your own modifier out of the three possible, but the 4th reel will additionally turn into a Wild Reel for the entire feature. The best part is that the Free Spins can be retriggered, along with all the goodies they come with. This is when you can get the highest payout of the game, 5000x the stake.

The reels in Cash Vandal are set within a railway carriage. As the reels spin, you get the feeling like a train is passing and leaving you different graffiti-style symbols on the reels. You will see blueberries, oranges, cherries, raspberries, watermelons, as well as gold bars, cash and diamonds.

In the background, you will see a city skyline, which changes as you go visit the different cities thanks to the Free Spins and the City features. We cannot continue without giving a shout-out to Play’n GO for the design, graphics, graffiti, and colours used in this slot, because they are so cool. Cash Vandal really stands out from the crowd of 3 and 5-reel slots, with ultimately boring themes. This one comes as a real refreshment.

When it comes to payouts, the Diamond symbol will give you 10x the stake for a 4-of-a-kind combo. Should you land 4 Wilds on one payline, you get 50x the stake payout. With the Wild Reels during the Free Spins and the City feature, you can get up to 500x the stake in a single spin. Thanks to the Free Spins’ ability to retrigger, your payouts can go up to 5,000x the stake, meaning $500,000.00. Awesome job, Play’n GO!

With no further ado, you must try Cash Vandal. It comes as a real refreshment, it offers an incredible payout potential and its gameplay is super-cool and engaging. Do not miss it. We repeat, do not miss it.