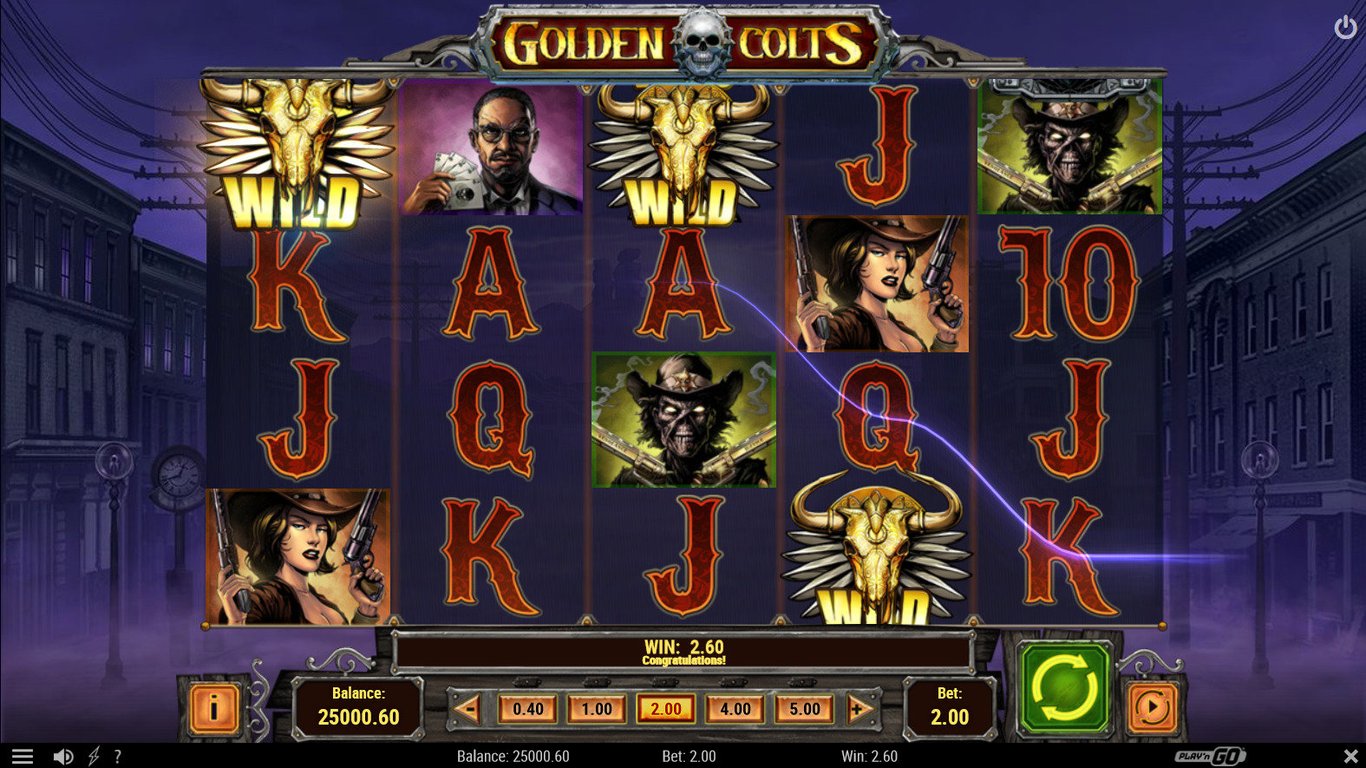 Saddle up for Play’n GO’s latest game release. Golden Colts is a 5 reel slot which features a horror Wild Wild West theme. You will be taken into the period when gambling, guns and crime were a lifestyle and you will enjoy every spin of it. Play’n GO has done a really great job with this slot, and shortly you will understand why.

The Wild in the slot is the Cow Skull, with its powerful horns, which will substitute for all symbols bar the Scatter but will also give you great payouts for a 5-of-a-kind.

The first feature Ace-High Gang will give you 3 Free Spins with 4x4 Mega Symbols landing on reels 2 and 5 on each and every Free Spin. The second feature you could win is the Wild Bull, which will also give you 3 Free Spins, but in addition, one or two reels will go entirely Wild on each of the Free Spins. The third feature is the Law of the Wild, which gives you 1 Free Spin and the zombie-like Sheriff with two guns symbol Stacked on the middle reels. When Sheriff Symbols fully cover the middle reels or when they create a 3x3 block, you are rewarded with 1 Re-Spin.

Furies is the sixth feature which gives you 1 Free Spin and two large 2x2 Girl symbols sticking on the reels for the duration of the bonus feature. With this feature, you're awarded 1 or more Re-Spins until you win. The last feature you could win is the Most Wanted. This is when 20 posters are displayed on the screen, and by selecting one, you get a hidden prize, which can be either cash or bonus features. You can keep on selecting posters until you reveal a Final Poster.

If the Final Poster reveals a Wild, an X or the Ace-High Gang symbol, it first awards you the related bonus feature and then ends the Most Wanted Round. If the Return Poster reveals the Sheriff, the Gambler, the Girl or the Gunslinger, you return to the Most Wanted round and again start selecting posters. You can get cash prizes which will be added to your total win amount. This is when you can with up to 2,500x the stake payouts!

With a scary Wild Wild West theme, Golden Colts looks like no other slot game. You are taken to a dark street, surrounded by purple mist, which sets the atmosphere of the horror cowboy story.

You have characters like the zombie Sheriff, the Gambler, the Girl, the Gunslinger, and a Cow and a Human Skull for the Wild and Scatter symbols. You have the playing card symbols for the lowest-paying symbols.

We must say that Play’n GO really showed all of its developer qualities in this game since both the gameplay and the design are impeccable.

When it comes to payouts, there are some major ones you can win here. First, the Wild gives you $1,250.00 for 5 symbols on the reels, the Sheriff $625.00 and the Gunslinger $500.00. But then with the special features, you can win up to 2,500x the stake payout for the highest bet. In money terms, this means that the highest payout you can get out of this game is $250,000.00. This is an incredible payout, suitable for both low and high-rollers.

There’s not much left to be said about Golden Colts. It is a game you definitely need to try because its gameplay is highly engaging, its theme super cool and its payout potential marvellous. Go ahead and try it because you won’t regret it.