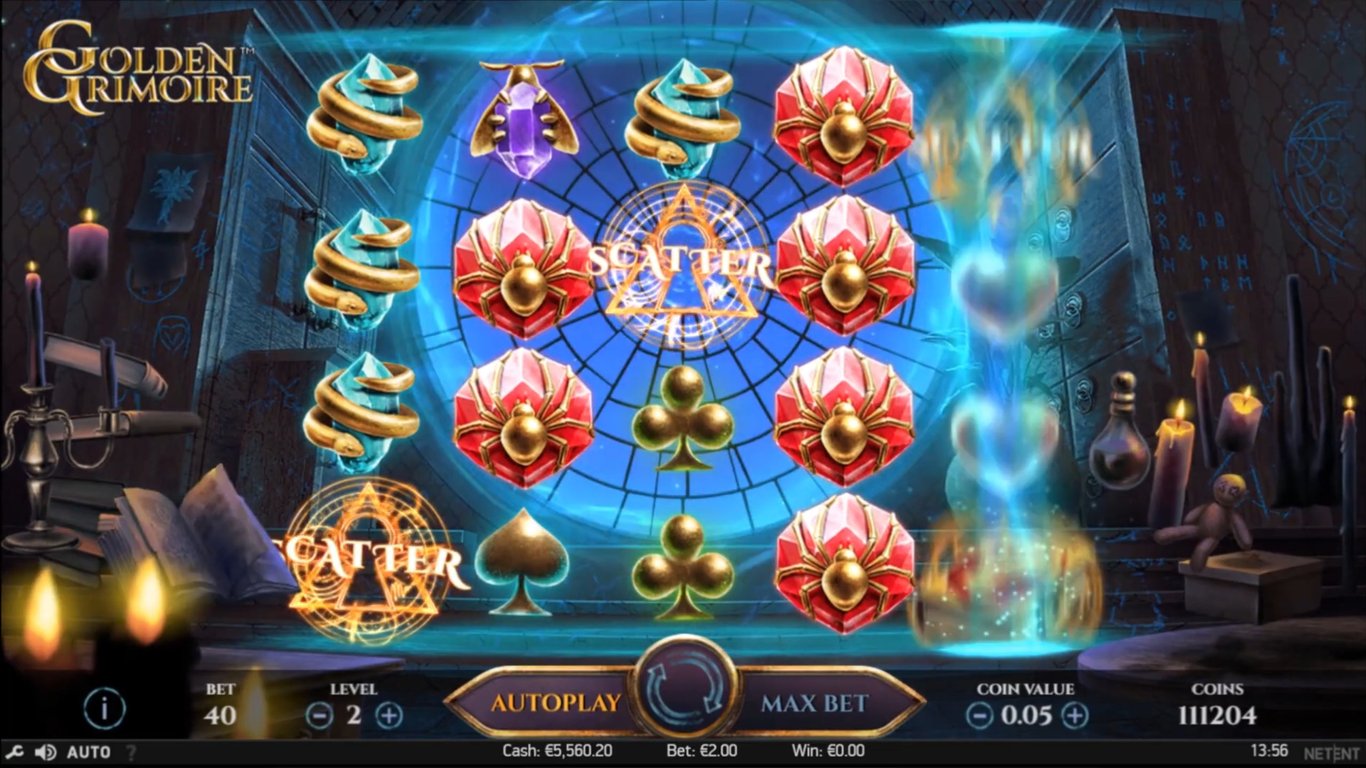 Golden Grimoire is the latest slot release by NetEnt. It is a magic-themed slot, and as you will notice, NetEnt has invested a lot of effort in the visual appearance of the symbols, because the slot looks stunning. You should expect magical but also diabolical objects on the reels, and a lot of unique features to make your gaming experience unforgettable.

As soon as you load the game, you will notice that the symbols will appear Stacked. These Stacked symbols will help you form multiple winning combos simultaneously, so as you can see, the things can heat up pretty quickly.

You will also bump into Mystery symbols. A spellbook will show you the symbols, which will also appear Stacked, but on the last 3 reels only. The Mystery symbol can appear randomly and cover all the positions where it appears. If you manage to land a same random symbol as the one that is present on the leftmost position of the row, all symbols between them will transform into the random symbol, which will actually guarantee a winning combo.

Golden Skulls are the Wilds in the slot, but they won’t land on the reels by themselves. The only way they can appear is through the Mystery symbols. Should you uncover 3 Scatter symbols on the first, third and fifth reel, you will access 8 Free Spins, during which extra Mystery symbols will land on all reels except for the first one. In addition, these Mystery symbols become Sticky during the spins, meaning at one point you might even get the screen filled with Mystery symbols. This is where you could get the highest payout of the slot.

Since the slot is inspired by magic, you should expect the reels to be filled with skulls, spellbooks, and gems surrounded by spiders or snakes. Each of the symbols appears with some mesmerizing magic effects, which only contribute more to the theme. As usual, NetEnt has made sure to present the slot with magnificent graphics. The visuals are absolutely stunning, that’s a fact.

NetEnt has given you the chance to bet on 40 paylines for better chances of winning. The minimum bet you could place for that number of paylines is $0.20, but you could place a bet as high as $400.00 as a maximum bet.

Now, the game's volatility is low to medium, meaning there will be frequent wins. The most you could get is 200x the stake per spin. The RTP is a little above average, 96.44%, so this game will basically attract low-rollers mostly since the maximum payout will not be that attractive for high-rollers.

Even though Golden Grimoire’s maximum payout is not as big as you would expect from NetEnt, it is still a fantastic slot game, one worth a try. You will be impressed by its graphics, its visual and sound effects, the symbolism included, the animations and the gameplay. It was definitely designed in NetEnt style, so maybe even the maximum payout was intended to be just 200x the stake. After all, the game is pretty low on the volatility scale, and NetEnt thinks about all of its fans, meaning low-rollers, this one was developed just for you!