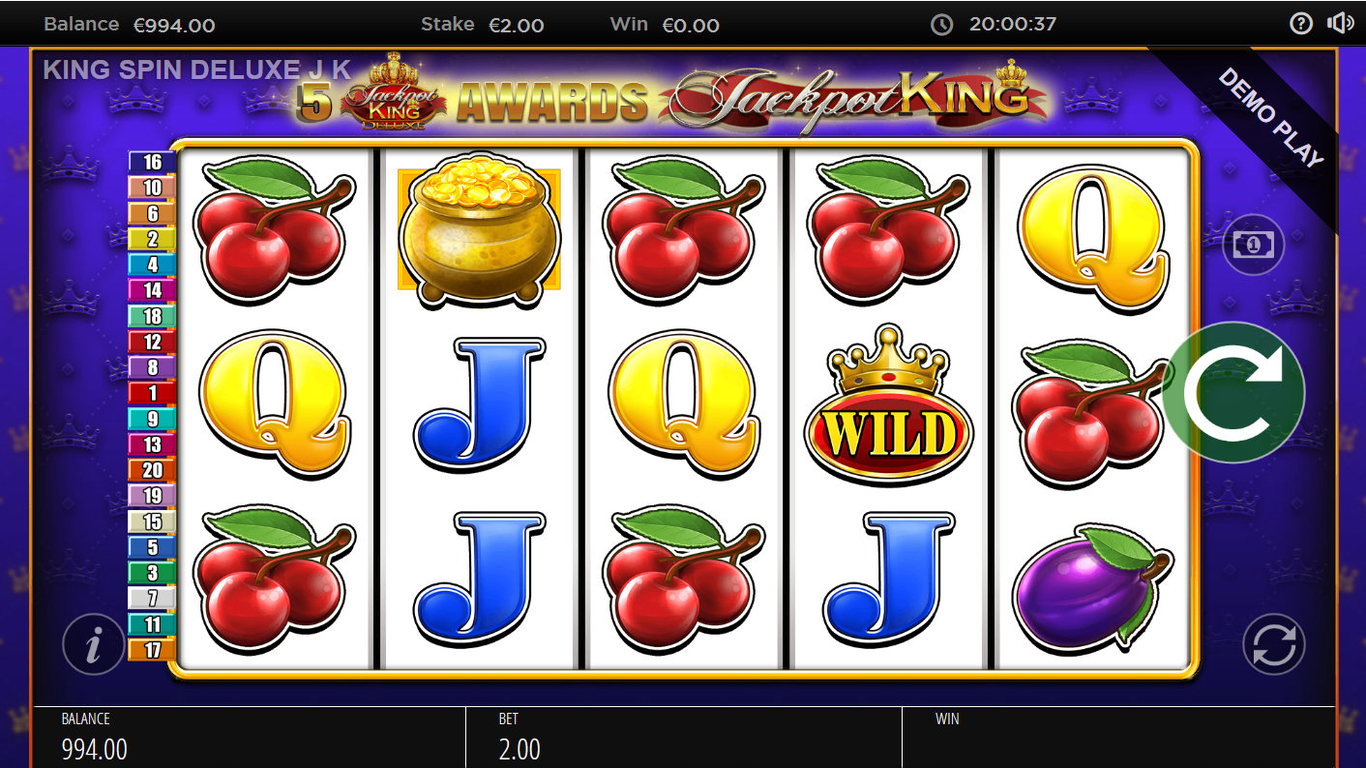 Blueprint has surprised classic slot machine fans with a new release, called King Spin. It is a game that provides state-of-art graphics and some modern-time features, with a classic slot theme. In addition to great visuals, the game will provide you with some major wins and even a chance to hit the progressive jackpot attached to it. The prize pool of the progressive jackpot keeps on increasing every second, so you never know the amount you could hit – probably millions of dollars.

The game features a standard Wild symbol with a crown on top of it, which substitutes for all symbols since there is no Scatter in the game. The Wild will help you form winning combos when you lack one symbol.

There is 20x multiplier which you can randomly trigger with the King Spin Deluxe feature. You need to spin the reels and collect Crown symbols since the more crowns you manage to collect the bigger total bet multiplier you get.

You also get a chance to pick from King’s Treasures to increase your prize. All these will eventually lead you to the Wheel King where you can get huge wins and get the chance to hit the progressive jackpot. There are actually three jackpots, the Royal Pot, the Regal Pot and the Jackpot King Jackpot, each one giving you a bigger amount than the other.

Since the game features a classic theme, you should not expect a special background or symbols. The royal background will display crowns, as expected, and on the top of the reels, you will see the 3 jackpot prizes displayed.

On the reels, you will find the Wild with its crown, some plums and cherries, and the rest of the symbols are the playing card Royals. There is also e pot of gold symbol you can find which is actually the highest-paying symbol, rewarding you with 500x the bet payout.

Although the RTP is rather low, 93.02%, there are some massive wins you can get here. You will, naturally, target the progressive jackpot, but don't forget that there are two more jackpots to be won. Plus, there is a 20x multiplier and some cash prize boosts that you can take advantage of. The slot promises a top prize of 500x the bet for the highest combo, meaning $250,000.00, which is actually a really awesome payout.

We must admit that before we tried the game, we thought that it will be nothing special. However, thank God we tried it. We found out that the game offers some pretty cool features, such as the King Spin Deluxe multiplier, the Wheel King and the three jackpots, one of which is a progressive actually. A single combo formed with the highest-paying pot of gold symbol will bring you a $250,000.00 payout which is incredible, so just imagine how much you could win if you manage to trigger all of the features. King Spin is the Blueprint’s game we would definitely recommend.