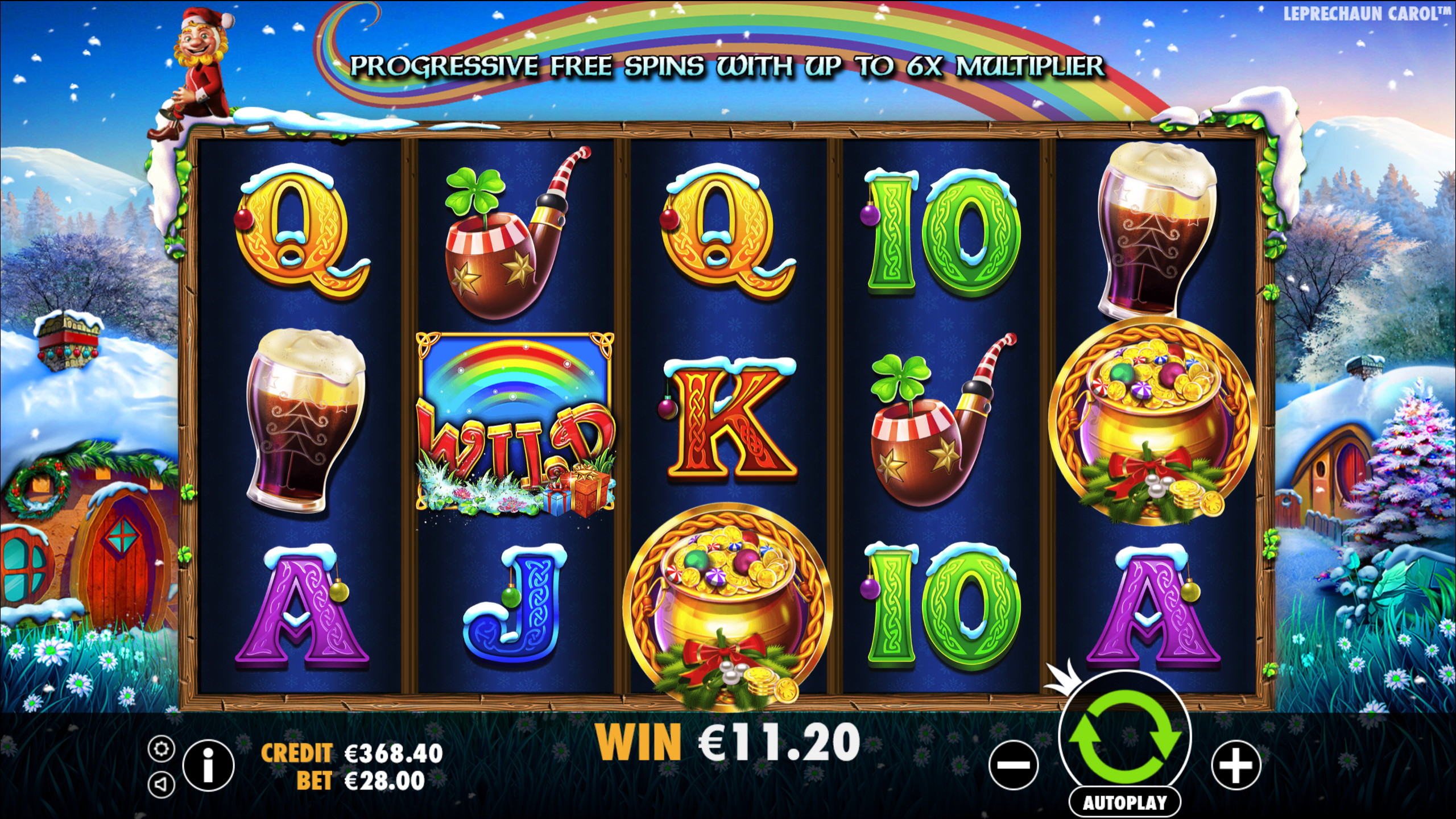 Pragmatic Play surprises us with a new slot release that combines two of the highly popular and well-liked themes by players, the Christmas and the Irish luck themes, called Leprechaun Carol. It is actually a very interesting mix with a cool final product: a Christmas story that doesn’t feature Santa or his little helpers but the cute Irish leprechauns. Since both themes remind us of presents, happiness and jolly times, be prepared to receive a lot of rewards and immersive features.

There is a classic Wild in the slot, which can give you as high payouts as 1,000x the line bet when you form winning combos. As per usual, the Wild will replace other regular symbols in winning combos.

In the base game, a cool thing can happen. The Random Spin feature may be triggered randomly which may give you Raining Wilds, meaning Wild symbols added randomly on the reels, or you may get the Pick a Fiddle bonus game, that will give you a cash prize. There is a third option, as well, the appearance of a Giant Symbol that will occupy 3x3 positions.

The Scatter in the slot is the Pot of Gold, which can land on the first, third and last reel. If you manage to get 3, you will trigger one of the two random bonus games. There is also a Scatter Nudge in this game that can move Scatters that are actually visible just a little outside the reel 5 area.

The Coin Collector will give you 15 Free Spins and a 4x multiplier, but during the feature, you can reach a 6x multiplier.

In the background of the reels, you will see the unusual yet highly interesting mix of themes. The setting is in a field, where you can see trees, mushrooms, little leprechaun houses, flowers but all covered in snow.

The game promises the highest payout of 1,000x the stake, which for the maximum bet would mean $100,000.00 but if you manage to trigger the bonus features, you can get a 6x multiplier, meaning you could get over $600,000.00. That’s an impressive payout, and considering the RTP is great as well, 96.53%, you could win a lot with this Pragmatic Play release.

We really enjoyed playing Pragmatic Play’s latest slot release, since it shows us another aspect of the popular leprechaun stories. The name of the slot is Leprechaun Carol, so it is indeed a Christmas folk story about the leprechaun. There is a lot of symbolism in the title of the slot, but we’re more interested in the payouts. Since we came to the conclusion that the slot can pay up to $600,000.00, there is a lot for grabs here, so go for it and try it.