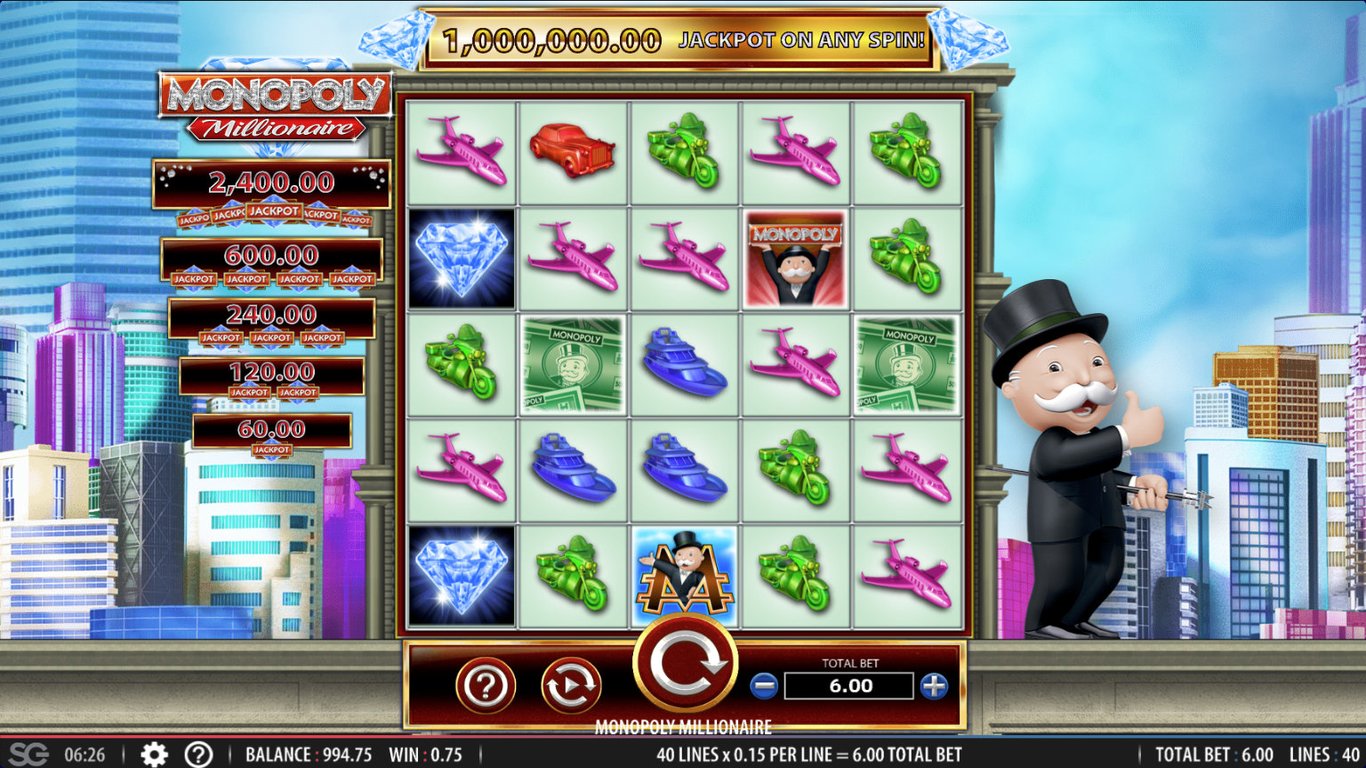 If you have played any Monopoly slot from the series, you probably know that they are all themed and look the same. You have the familiar face, Mr Monopoly entertaining you, and you have several other symbols that convey the famous board game. However, there’s always a slight difference between the slots in this series, and that’s usually the RTP factor and the maximum jackpot payout.

Bally has recently released the Monopoly 250k, so basically, this latest addition Monopoly Millionaire tells you that there will be a significant difference in payouts since instead of 250k, you can now get 1 million as the highest payout. No slight difference here, right? The tiny difference, though, can be found in the RTP, where you get a 0.01% higher percentage in the new game.

You will see Mr Monopoly on the reels in several instances, aiding you in the formation of bigger wins. You will see him in the Wild symbol, the Wild Logo with Mr Monopoly on top of it. The Wild will form winning combinations with other Wild symbols, giving you the highest-payout from individual symbol combos. But also, the Wild will be used as a substitute for regular symbols, so it will help you in the formation of winning combos where you lack one symbol.

You also have a Scatter in the game, presented with the Big Wheel Bonus logo. It can trigger the Big Wheel Bonus feature, but you will need to land it on the three positions where it could possibly land. You then get a spin on the Big Wheel and the result will be a cash prize or an access to another Monopoly-inspired feature.

This time we're talking about the Community Chest feature. It can appear at random and improve your wins by 2x to 10x for the round in which it appears and will help you get the most out of this game's regular rewards.

The slot has a typical Monopoly theme, one portrayed fittingly. As mentioned, you will see Mr Monopoly in 3 symbols, but you will also see Monopoly money, boats, cars, motorcycles, planes, diamonds and a huge city in its background, with the numerous skyscrapers.

With no further ado, the massive jackpot prize speaks for itself in this slot. We don't need to tell you more about it since you know the Monopoly theme is really fun, and with this kind of jackpot that can be randomly hit, we give you our highest recommendations to try it.