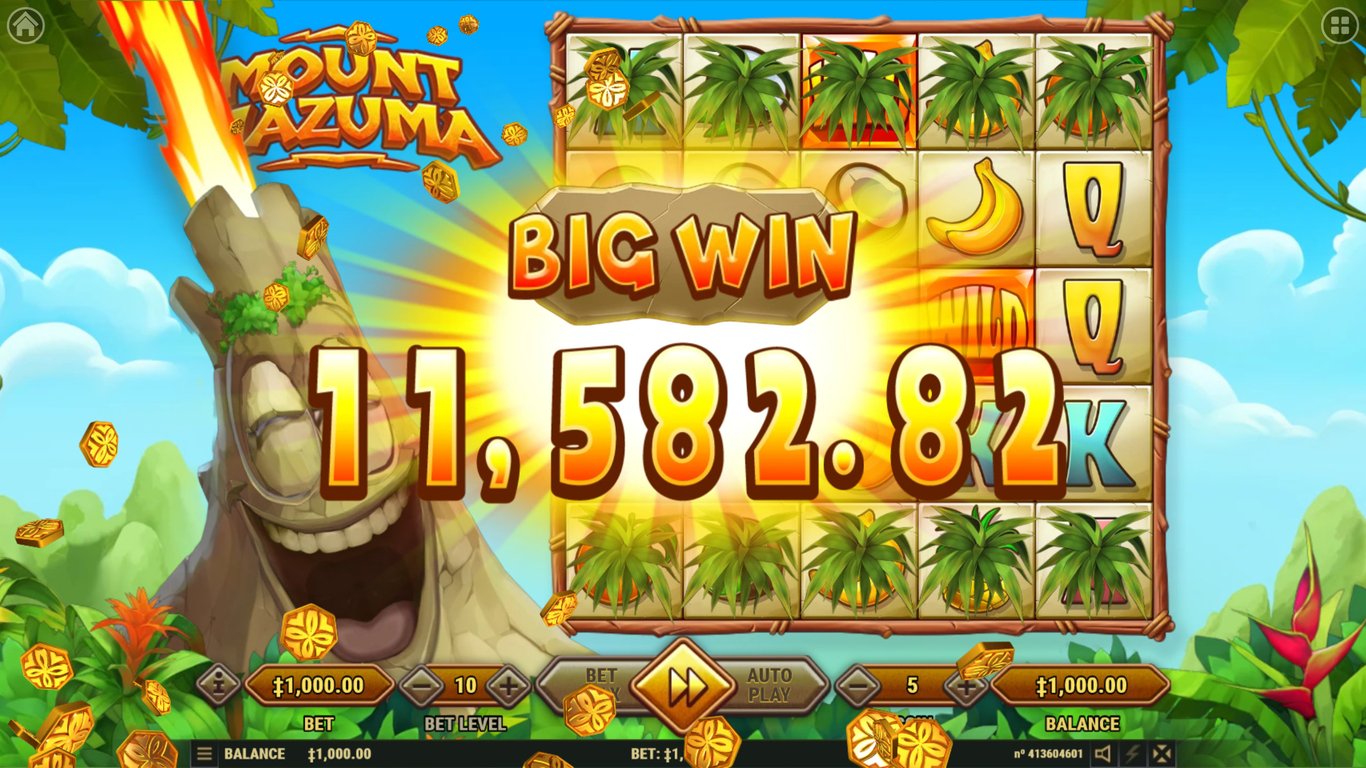 Habanero has released a new slot game, inspired by the Mount Mazama, the complex volcano that lies in the US state of Oregon. Slightly changing the name of the volcano, Habanero named the slot Mount Mazuma and portrayed to you the beautiful things that can be found in the volcano's surroundings. Mount Mazuma is a slot which is packed with erupting features and has fast-paced gameplay that will take you to some major payouts.

There is a standard, orange Wild included in the gameplay, which substitutes for all symbols except for the Cocktail Scatter and gives you a payout for a 5-of-a-kind combo.

The Scatter gives you payouts for winning combos with 3 to 5 symbols anywhere on the reels, and its wins are multiplied by the total bet and added to your other wins.

Mount Mazuma also features one super-cool feature that can split a number of symbols into two horizontal symbols, giving you additional ways to win, called Super-Ways feature. The same symbol, excluding the Scattered Cocktail, is guaranteed to appear on individual Super-Way blocks.

There is another exciting feature called Unlock Feature, which covers all symbols with the Top, palm-like part of a pineapple. Each Scatter that appears anywhere on the reels removes the pineapple Top on a random symbol before pays are awarded. The Top stays removed only for the Free Games. The Top covers symbols on rows 1 and 5 and resets at the beginning of each base game.

But, Mount Mazuma also gives you Extra Wilds. The feature, which can be triggered at any spin, changes two random symbols (not existing Scatters and Wilds) into Wilds before pays are awarded. Super-Way blocks change into double Wilds symbol during this feature.

Let’s not forget the Free Games. 3 or more Scattered Cocktails appearing anywhere during the base game reward you with 10 Free Games. If you receive less than 5x your bet after the Free Games, you get the Extra Chance! Feature, which is another free game. During this feature, all Tops unlock, and you’re guaranteed the Super-Ways Feature and the Extra Wilds Feature. Scatters cannot appear during this game, but if you receive less than 10x the stake for the Extra Chance! Feature, you are awarded 500x the stake!

When you load the game, you’re immediately introduced to the cute-looking, personified volcano, looking like he is really bored. There are clouds circling around his “head”, and he has bushes for eyebrows. You can see different exotic flowers around it, the skies are bright and blue, and the reels are made of bamboos. With crisp-clear cartoony graphics, Habanero has presented the slot impeccably.

On the reels, you will see coconuts, pineapples, bananas, oranges and kiwis, along with the playing card Royals. The refreshing Cocktail which is made out of the earlier mentioned fruits is the Scatter in the slot.

This game is very rewarding but also has quite the betting range. You can select the bet level and the coin value, which at the lowest levels gives you a minimum bet of $0.20. Now, if you select bet level 10 and coin value $25.00, the maximum bet you can place is an amazing $5,000.00.

Mount Mazuma is a highly rewarding game. You can get a $2.5 million payout if you place the maximum bet and you get to the Extra Chance! Feature, plus an incredible RTP, rarely found nowadays. In addition, the graphics are incredible, the sound and visual effects are top, and the gameplay is engaging and filled with special features. Basically, the game is everything you were hoping to find in a slot machine. Do not hesitate and try it right away.