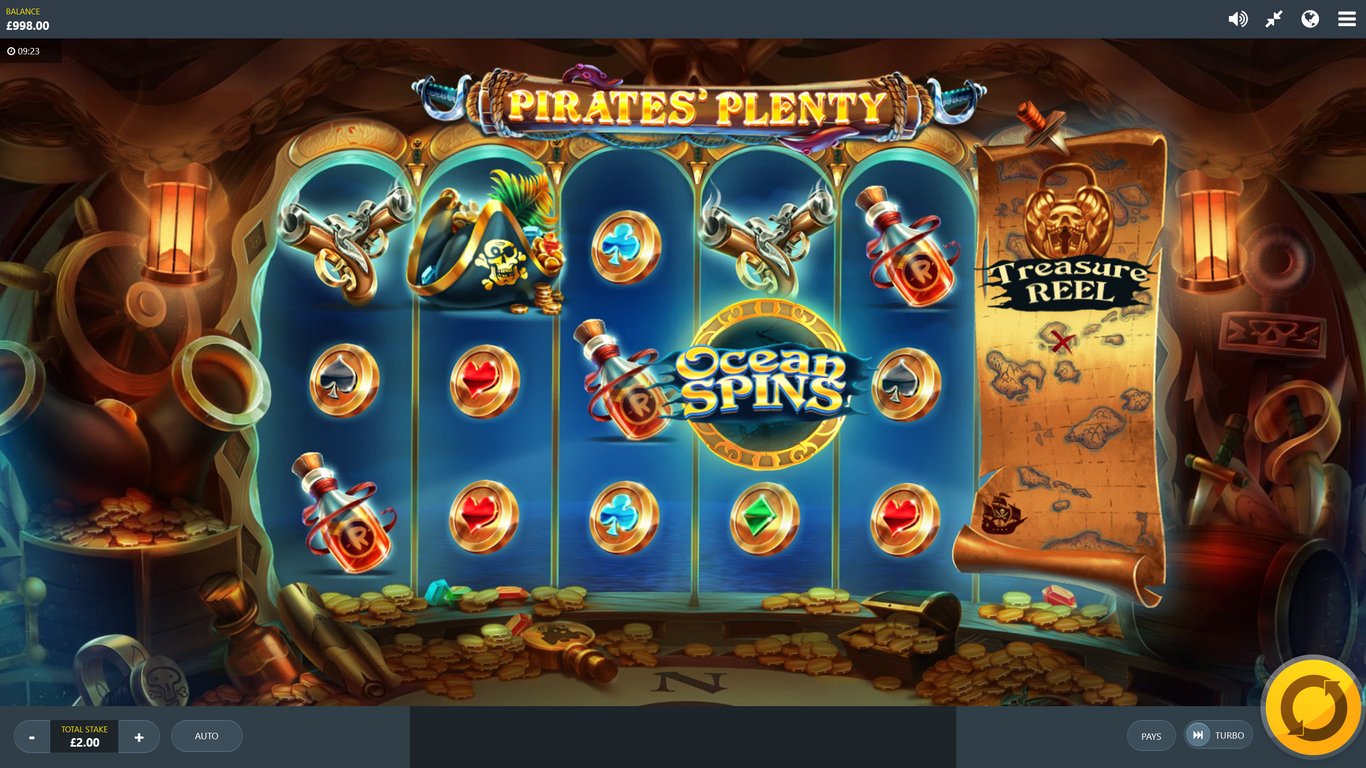 Red Tiger Gaming has a new slot release, called Pirates Plenty: The Sunken Treasure. It is evident that it features a pirate theme, so you will be searching for a lost, sunken treasure. It is an amazing looking slot that will provide you with cool special features and some impressive prizes.

First, you need to know that although the slot features 5 reels, a 6th one will appear as a special feature, Treasure Reel. This reel can be activated in certain instances, which will give you additional payouts when you form a winning combo. When this reel appears, up to six symbols will appear on it. You can unlock this reel as soon as you land a Treasure Map symbol with an X on it. The ship will then start moving closer and closer to the X on the map and will eventually unlock the Treasure Reel.

You will also get an Expanding Wild when the Treasure Reel is active, presented with a Ship in a Bottle symbol. When it appears, it covers full reels. It can also form winning combos with regular symbols and pay you some great deal. You can even get 2x, 3x or 5x multipliers from these Wilds, so obviously, you will get twice the prize for the winning combo.

The Pirate Wild is present as well, but it has a rather cool role in this slot. Being a pirate, it will steal low-paying symbols and will give you bigger prizes, since the only symbols you will be left with will be the higher-paying symbols.

With Pirates Plenty: The Sunken Treasure, you’re getting an easy-on-the-eye game, set on a pirate ship filled with treasure chests. You will see symbols such as muskets, cannons, captain’s hats, gold coins, and bottles of grog, skulls, the captain and his monkey. You will also get playing card suits for low-paying symbols.

In the background, you will see the inside of the ship, with a lot of gold coins on the ground and a floor that looks like a compass, showing you the Nord. When you score a Mega Win, you will see the eerie captain smiling, and coins with skulls on them all over. All of this is depicted with astonishing graphics and portrayed with great attention to detail.

As for the payouts, there are some awesome wins you can form with the regular symbols for a winning combo, but the max payout for a single round is 2,000x the stake.

We really liked Pirates Plenty: The Sunken Treasure slot, since it provides an engaging gameplay, one that will never bore you. You will enjoy the special features and the beautifully-crafted symbols. There is a lot of action, and although the max payout is not that impressive, you will get frequent wins that will make your day.