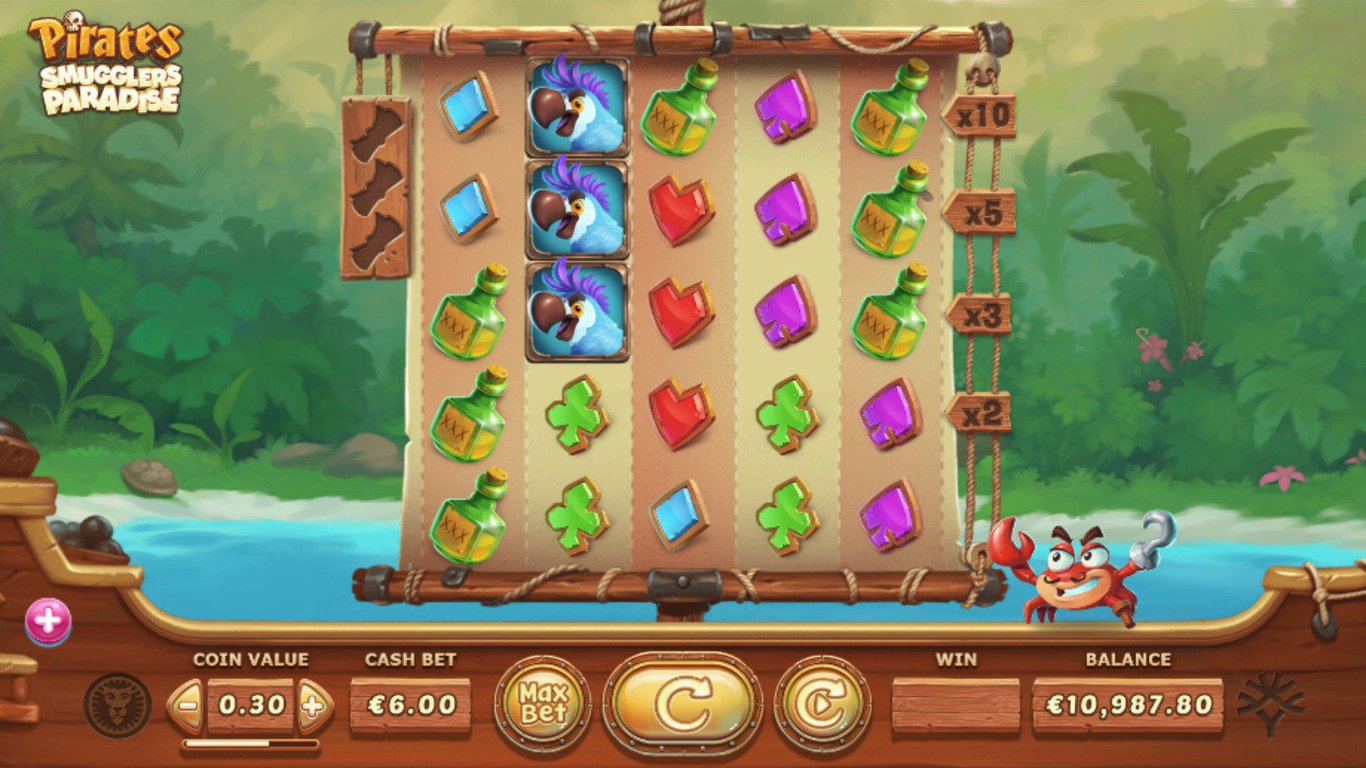 A new Yggdrasil game is on the horizon and is nothing you would expect from its name Pirates: Smugglers Paradise. You won't find dangerous pirates that do harm to everyone on their way; no, you will find friendly, cartoony characters that present the pirate theme in a positive light. There are several promising features, though, which make the game worth a try.

The first thing you should know about this slot is that it incorporates the Cluster Pays system. You will need 6 matching symbols to form a cluster, which need to be adjacent in order to pay anything. The Dropdown Wins is the feature where the clusters can influence the outcome of the game. So 6 adjacent symbols form a cluster, and the symbols that formed the cluster remain while other symbols are removed from the reels. If you land a second cluster with different symbols, they count as losing symbols. The winning symbols will drop down and you will get new random symbols in the empty positions. This feature will continue paying until there are no new winning symbols.

There is a Free Spins symbol and collecting 3 or more of them will reward you with 7 Free Spins in the base game. There are three versions of the Free Spins feature, the Win Fall, the Multiplier Madness and the High Seas.

But there are also some multipliers you could take advantage of. In fact, with each row you fill with winning symbols, you get a Win Multiplier to be added to each Dropdown win. The multiplier resets after each spin. If you fill 1 row, you get 1x multiplier, and with the 5 rows you can get up to 10x multiplier applied to your win.

Though this is probably one of the most common themes in slot machines, it is not depicted conventionally. The graphics are cartoonish and you can notice the attention to details and the quality of the design. As symbols, you will find 1 bird and 3 human characters as highest-paying symbols, a gun, a knife, a hook, and a bottle of rum. The lowest-paying symbols are the suits of playing cards. The little pirate shrimp is the character that welcomes you and cheers whenever you win.

As you can see, the slot implements the Cluster Pay system so there are no conventional paylines, though the number of coins is 20 and is fixed. The minimum you could bet is $0.20 while the maximum is $100.00.

As soon as you load the game, in the intro, you will notice that the game promises a payout of 5,000 coins in a single round. This, plus the combinations of matching symbols that can bring you a multiplier of up to 10x could significantly increase the value of the payouts. As always, Yggdrasil provides you with a nice Return to Player percentage in order to entice players, even more, one of 96.30%.

Although many could find the cartoonish graphics discouraging, trust us, this slot is super fun and has a lot to offer. Forming clusters in order to achieve a win, while collecting multipliers and Free Spins is not only highly entertaining but profitable as well. The RTP is more than decent, there is a lot for grabs per a single round and there are rewards in both the base game and the free games.