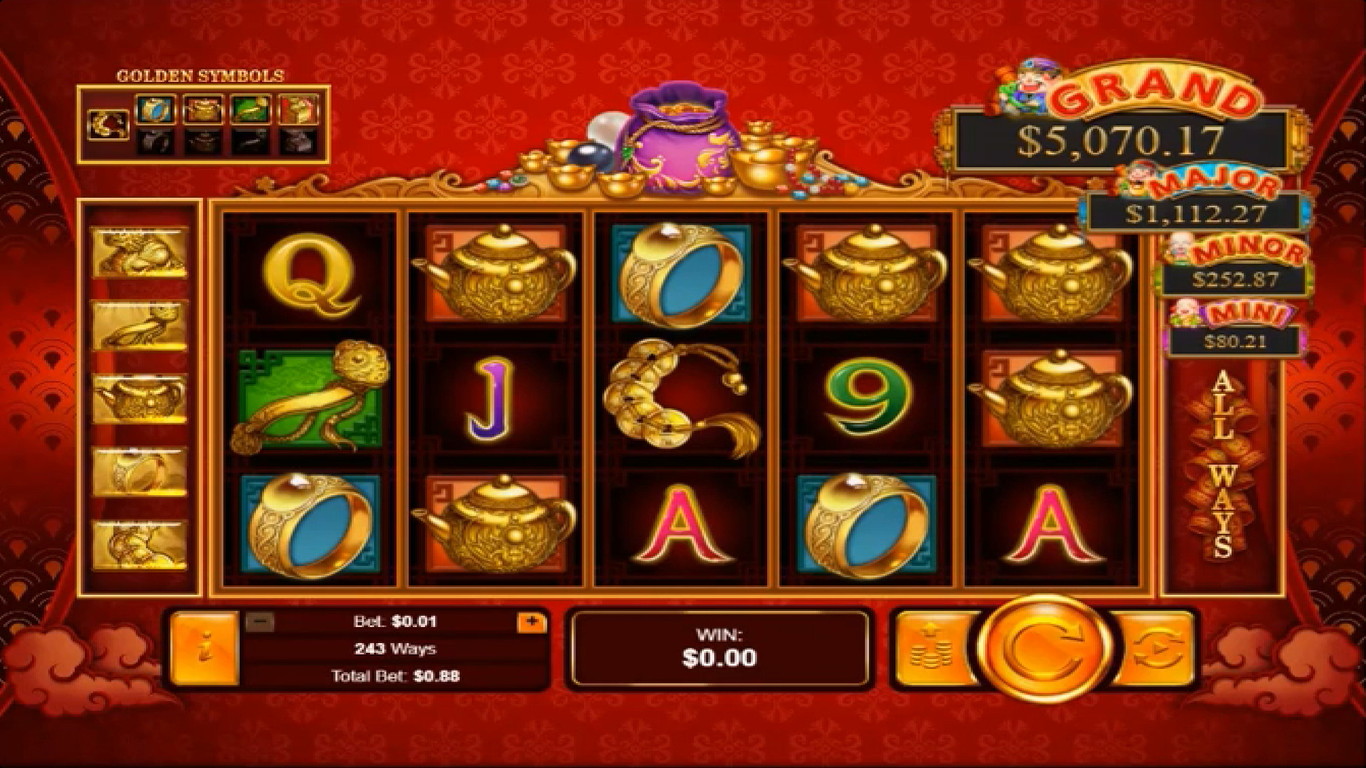 Real Time Gaming has a new slot release called Plentiful Treasure. It is an online version of a popular terrestrial slot played in Macau. It offers many special features to make your gaming experience more engaging and interesting and it can give you four separate jackpots for the right combinations. Check this Oriental-themed slot and enjoy it.

The Wild in this slot is a symbol with something written in Chinese on it, with a blue background and two crossed arrows behind the writing. It can appear on the middle reels and it can replace any regular symbol on the reels, except for the Pearl symbol.

The Scatter symbol in the slot is the symbol with the brown Oriental bowl, probably where they used to keep the treasures. The Scatter gives you 50 coins for a 5-of-a-kind.

The Pearl symbol, as you could've noticed, plays an important role in this slot, which is weird, because, in any other slot, you can only see Wilds and Scatters playing some crucial roles. But in Plentiful Treasures, the Pearl symbol acts as a replacement, as well, for all regular symbols except for the Wild and the Scatter symbol, although it can only appear on reel 3. When it forms part of a winning combo, the Pearl adds a 1x, 2x, 3x, 4x, or 5x multiplier to all your winnings.

Three or more Scatters award you 8 Free Games, and during this feature the low-paying symbols are removed and you’re left with the highest-paying symbols, meaning more significant payouts are on the horizon. This feature, in addition, can be retriggered.

We mentioned that there are four jackpots in this slot that can be triggered. The higher bets you place the more golden symbols appear on the reels, which actually enable the jackpots. You can win the Mini, the Minor, the Major and the Grand Jackpot.

As far as the theme goes, there is nothing much to be said. It is a typical Oriental theme present in many slots, where gold coins and precious items appear on the reels. You have all kinds of golden rings, golden teapots, golden statues, and pearls appearing on the reels, as well as playing card symbols. The most interesting aspect of the theme is how the jackpots are represented, with the 4 cartoonish Gods.

The game promises a payout of 50,000x the bet you make. Since we’re uncertain as to what the maximum bet is, we cannot guarantee for sure the maximum payout, but we can assume that it will be huge, no matter what. You will definitely win some big sums of money with this slot, since other than the payouts from the base game and the special features, you have the four jackpots for grabs. And another important thing: the game offers 243 All Ways Pays grid, so it is obvious that you will win big here.

Although we have come across hundreds of Oriental-themed slots, we are blown away by the features this game offers. Plentiful Treasure really deserves its title. There is a lot for grabs here, starting from individual combos, the special features and finishing with the four jackpots. Without further ado, we definitely recommend it.