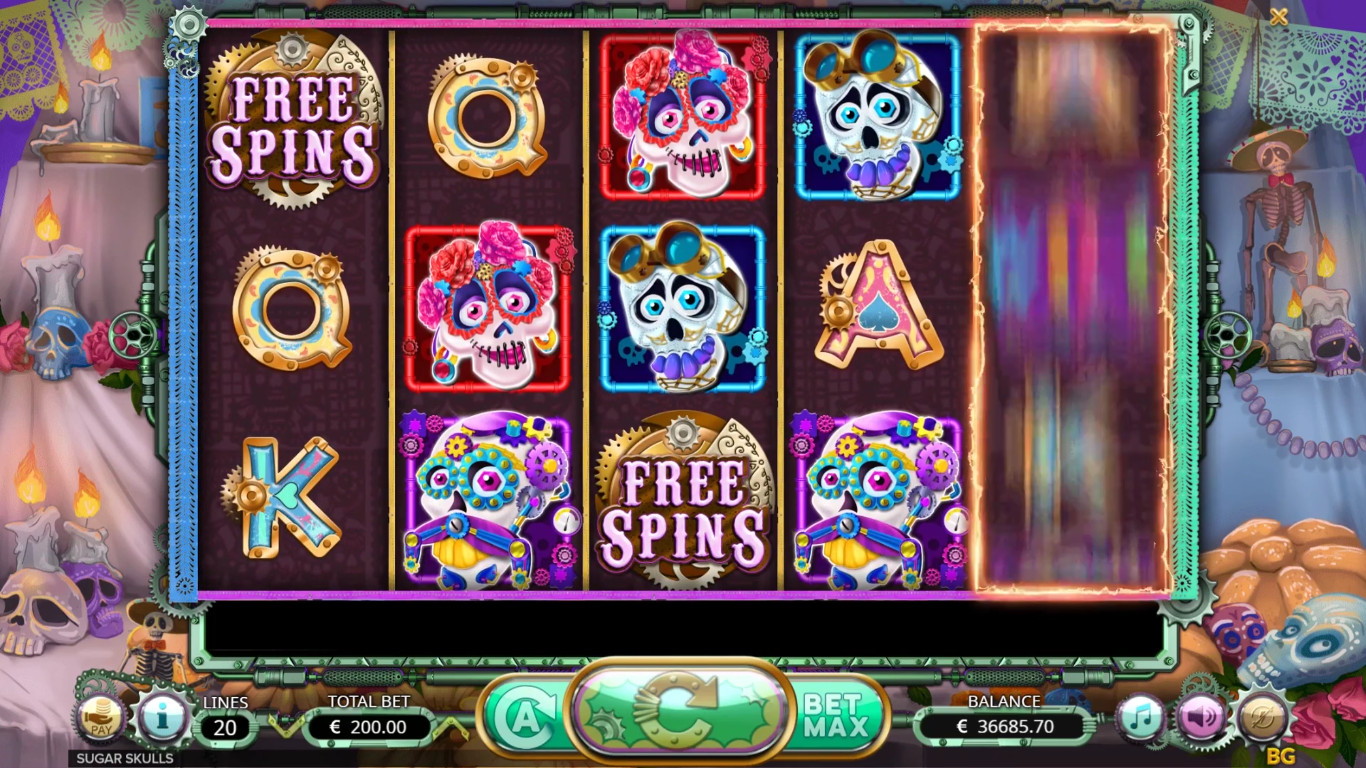 If you love Halloween but you’re tired of everyone trying to come up with the scarier costume or Halloween line to make themselves interesting, then check Booming Games latest slot release, called Sugar Skulls. This slot looks super fun, with the traditional skulls and flowers and colors but presented with cartoony graphics that make the skulls look happy instead of creepy. The more you look at the reels, the more you’ll like the game.

There is a number of features you will come across in this slot, so let’s start from the beginning. You have the standard Wilds as well as the Scatters that are presented with a symbol with Free Spins written on it.

As the name implies, 3 Scatter symbols will trigger the 10 Major Free Spins, where the minor symbols are removed and only stacked major symbols (appearing either completely or partially on the reels) and Wilds are featured. Speaking of Wilds, they can substitute for all regular symbols except for the Scatter. The Wild is also the highest-paying symbol in the game that can reward you with $2,000.00 for 5-of-a-kind.

Sugar Skulls is based on this holiday, sure, but shows the good side of it, where the symbols are portrayed with cartoony graphics and give the message that life goes on, even though we lose our loved ones along the way. The entire slot is colorful, cheery and fun. The symbols include different multi-color, happy skulls, one with a golden mustache, another one with flowers and the last one with binoculars. The playing card Royals are also present and represent the minor symbols. The background looks like a shrine where you pay respect to the dead, with a skeleton wearing a sombrero, skulls that were turned into candle-holders and other items representative of the Mexican culture and tradition.

Sugar Skulls features 20 fixed paylines, where you can bet as little as $0.20 or as much as $400.00. You cannot find slots with a maximum bet like this that often, perfect for high-rollers. Even though the RTP is not disclosed yet, you can imagine the payouts you could get from this slot. Judging by the highest multiplier you could get, 100x the stake, you could win at least $40,000.00 for one spin. Add the other features to the equation and rest assured that there is a lot more for grabs in this slot.

We are absolutely impressed by this slot. Its stunning graphics, fun characters, the quality with which the theme is depicted and the payouts really make it worth your while. With no further ado, we would gladly recommend it to any slot player interested in celebrating the Day of the Dead playing slots, since this slot will provide you with a fun gaming experience, that’s for sure.