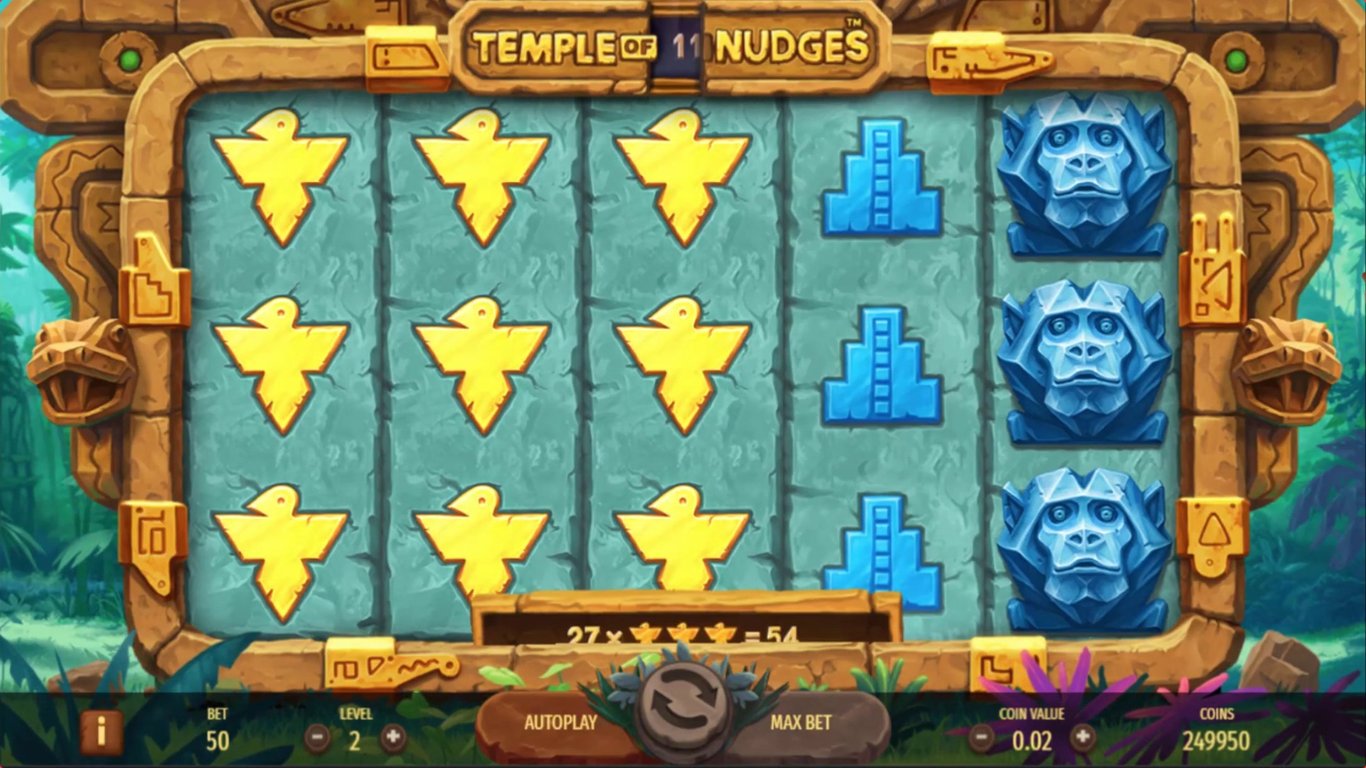 NetEnt has released Temple of Nudges, a 5-reel slot that will take you into the deep jungles of the Mesoamerican civilizations. You will greatly benefit from the Nudge feature, which as implied by the title of the slot, will play an essential role in the gameplay.

You would expect from the slot to have Free Spins, Wilds and Scatters, considering all slots offer them. However, Temple of Nudges will focus greatly on the Nudge feature. You will trigger this feature by landing 3 or more symbols that match on adjacent reels, from left to right. This will trigger a chain reaction where all reels move a symbol down. If you continue matching symbols, this will be followed by another payout. Considering you will find fully Stacked symbols on the reels, the Nudge feature will give you consecutive wins.

Maybe there are no Free Spins in Temple of Nudges, but there are Re-Spins. As soon as you notice the Re-Spin symbol appearing in a winning combo, you should know that you will be rewarded with a Re-Spin where all winning symbols will remain Sticky on the reels they’re on, and the other reels with the non-winning symbols Re-Spin. In case you land another Re-Spin symbol, the feature will retrigger. In addition, after the Re-Spin round finishes, the Nudge feature may also continue, leading to additional wins.

As mentioned in the intro, the slot is inspired by the Ancient American tribes and civilizations. You will see the stone-made reels, presenting the temple’s wall, and the jungle in the background.

On the reels, you will see animal-inspired animals made of stone, as well as some symbols found on the temple’s walls. The symbols include suns, sloths, temples, snakes, monkeys, anteaters, birds and jaguars. We love the fact that there are no Wilds nor Scatters in the slot, and we must admit that NetEnt did a great job with the design of the slot and the gameplay.

As for the payouts, you should expect a 0.36x the stake payout across a payline via the Jaguar, the highest-paying symbol. Provided you fill the screen with this symbol, the maximum you could get is 87.48x the stake, which means $21,870.00 per spin. Considering the Re-Spins and Nudges, this payout could become way bigger. Nevertheless, we don’t think it would be insanely bigger, at least not enough big to entice high-rollers, but still, it would be a decent one.

One thing is sure, Temple of Nudges has interesting gameplay for a game that does not offer the most often used special features and symbols like Wilds, Scatters and Free Spins. The Nudge feature and the Re-Spins contribute to the maximum wins and that's enough. Plus, there are no playing card symbols, and we're greatly thankful for that. Now, the payout potential may be rather mediocre, but still, not every game needs to be highly volatile. In all, Temple of Nudges is a game that you would want to try, all things considered.