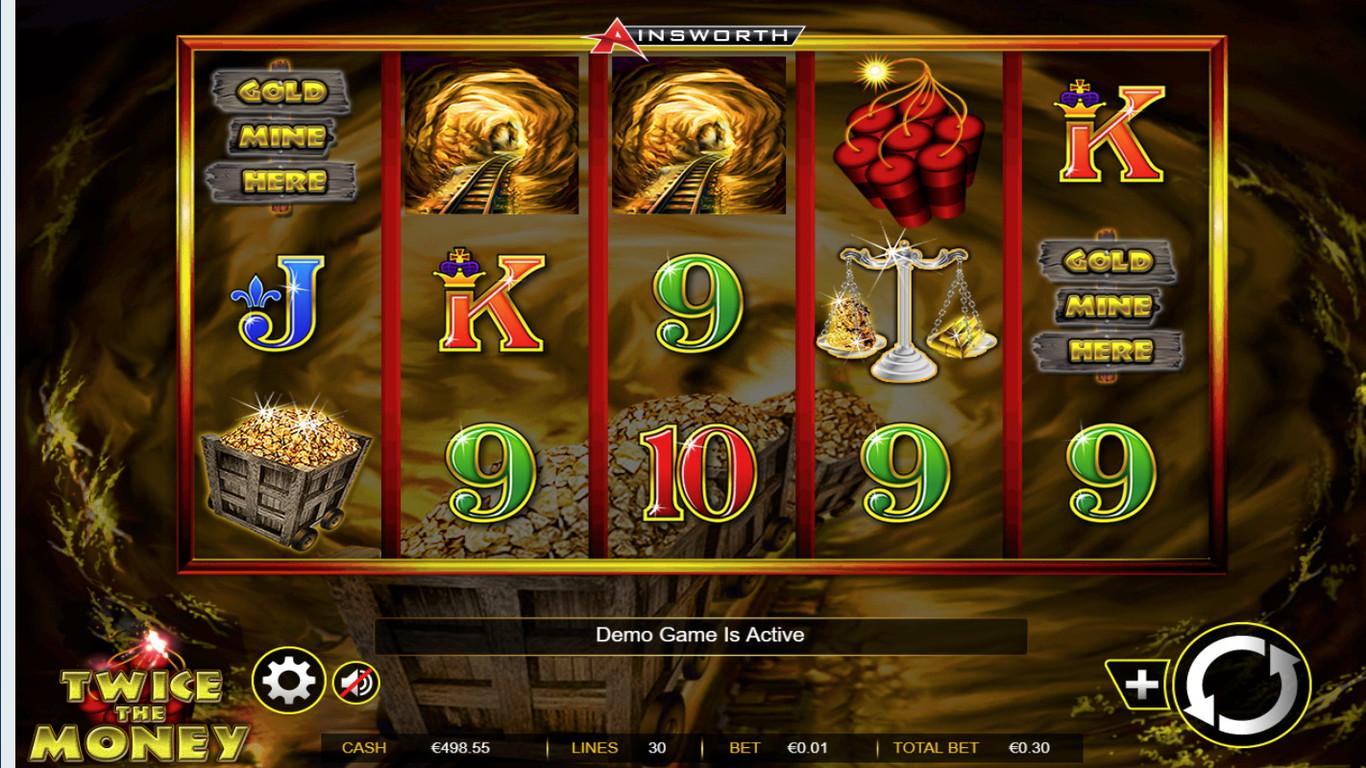 Twice the Gold is the latest slot release by Ainsworth, which seems to be the second of what appears to be a "Twice of…" series since the game developer already has a game called Twice the Money. Now, just like the first one in the series, the second one also revolves around gold, the most precious metal in the entire world. It is only reasonable for game developers to base their games on gold since that is what we’re searching for in slots – to provide us with untold treasures.

You will really have fun with the features Twice the Gold offers. You will find Sticky Wilds, Free Spins, Increasing Multipliers and Scatters, and some additional surprise features.

Let’s start with the Wild. You can benefit from the Wild when it acts as a substitute for regular symbols, but only when it lands on the line where the win is supposed to be formed.

There are Scatters, as we said, which play a fairly interesting role. You will be required to land at least three Scatter symbols in order to get access to the surprise features. You will get 3 choices and you will be the one who decides which one to take.

The first choice is Twice the Diamonds feature. This is the feature that will reward you with 10 Free Spins, where you will get the aforementioned Sticky Wilds. The Sticky Wilds will appear on reels 2 and 4. But that's not all. This feature will give you Increasing Multipliers, as well.

The second choice is Twice the Gems feature. Here, you will also get 10 Free Spins and Sticky Wilds on reel 2 and 4, but you will get the chance to retrigger the feature altogether, too.

The third choice is Twice the Money feature. This last feature will provide you with the 10 Free Spins and the Sticky Wilds on the second and fourth reel, but will also give you the Extra Money feature and Increasing Multipliers.

Another surprise for you is that the game features a Major, Maxi, Minor and Mini Jackpots, which can be triggered randomly.

For a slot inspired by gold, it should come as no surprise that the reels will be covered with gold. Actually, you will find gold safe doors, gold coins, gold rings, gold bars, gold nuggets and gold dollar signs for symbols, meaning you will be blinded by gold. That's not too bad since the symbols reflect the theme perfectly. The playing card symbols should be removed from the reels, though, since they do not fit the theme, not even a bit. Although visually the slot looks neat, the symbols are not that impressively crafted.

For a single spin, you can bet $0.25, which for 25 paylines means $0.01 per line. You can increase your bet whenever you feel comfortable to since it is a medium volatile slot machine and you will not be waiting too long to form a win.

As for the RTP, we must say that we’re disappointed since 93.99% is low even for Ainsworth. These days, an RTP lower than 96.00% is simply unacceptable. Ainsworth probably wants to cover for the RTP with the cool Increasing Multipliers, Sticky Wilds and Free Spins, however, some players refuse to play slot games with that low of an RTP.

Other than the low RTP of 93.99% and the lack of enthusiasm in the symbol design, we cannot say that the game has flaws. Theme-wise, it is a common gold theme but fittingly presented. Payout-wise, it gives decent payouts and pretty often, too. Features-wise, the Free Spins, Sticky Wilds, Increasing Multipliers could really bring the fun in this slot. In all, we could say that Twice the Gold is a slot for those slot players who enjoy a simple gameplay and frequent, solid wins. If you’re more of a slot player interested in action, adventure and state-of-the-art graphics, this is not the game for you.