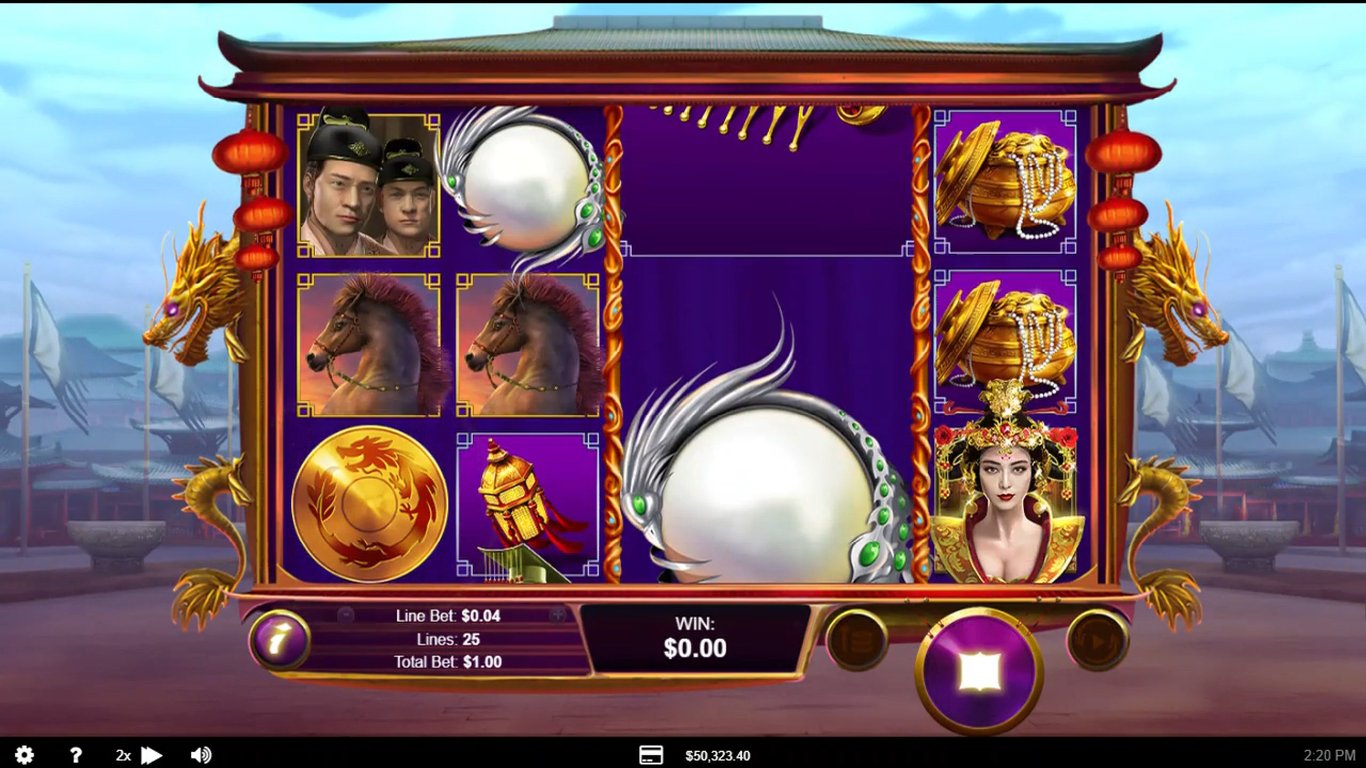 Wu Zeitan is the newest slot release by Realtime Gaming, based on a popular video game in China. Even though it may sound differently to you, the title of the slot presents the name of the first Empress of China. She was a family member of the popular Chinese Tang dynasty and ruled China a long, long time ago. Now, we get to see the symbolism of that time presented on the reels, courtesy of Realtime Gaming.

One of the major features in Wu Zetian that will appear in many forms throughout the gameplay is the Wild Pearl. It is going to substitute for regular symbols when you need to form a winning combo but you’re lacking one symbol. In addition, the Pearl can occupy 3x4 positions because it can also appear in giant size on the reels. Giant symbols, in general, will appear in the slot, not only the Wilds. In fact, they can appear in the form of 3x2 up to 3x5. As you can see, the Wild cannot appear in the biggest size, but other symbols can, so they can actually give you some major rewards.

The Scatter in the slot is the Golden Gong symbol. It will appear in its regular size, and you will need 3 to 5 Scattered Golden Gong symbols on consecutive reels in order to get 5 Free Spins. Now, as you can see, the number of Scatters does not determine the number of Free Spins, since you get 5 fixed ones. But, the number of Scatters determines how many connected (matching) reels you will get in the game. This means that depending on the triggering Scatters, you can get 3 to 5 reels covered in one, matching symbol. This is where you can get the game’s highest payout potential.

Theme-wise, Wu Zetian has been designed to portray the life of the Empress in detail. You get her gold-covered hairpin, her jewellery box filled with expensive necklaces and earrings, the giant Scattered Pearls, a jade lion statue, a horse, lanterns, roses, the Empress' servants and enemies, and in the background, you see her residence. The Empress and her beloved husband also appear on the reels, and when their symbols become giant ones, you can clearly see their beauty and RTG’s attention to detail in designing the slot.

For this betting range, you get 50,000x the line bet payout, which means no more than 2,000x the total stake. Now, for the highest bet, that would mean that the highest potential in the game is $125,000.00. This is more than a decent payout that will definitely motivate you to try the game.

Wu Zetian is a really magnificent slot. You may get discouraged by the Ancient China theme since it is a very common one, but don’t be. Load the slot and you’ll change your mind immediately. The slot looks amazingly and can provide you with some interesting features. In addition, it gives you a pretty nice payout of $125,000.00, so at least it deserves your attention. Once you try it, you’ll get mesmerized by the giant symbols, depicted in detail, and you will continue playing it until you hit the highest payout. That’s for sure!